Me, Huntz Hall and long ago. 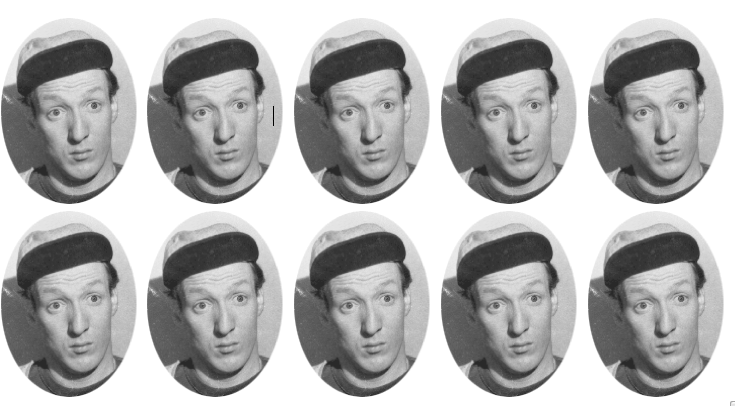 There’s a small store around the corner on 11th between Broadway and University that sells all manner of baseball memorabilia. The owner of the place has an art director’s eye and a copywriter’s wit and he usually has something in the front window, or on the chalkboard he places on the sidewalk that impels me to go in. While I’m inside, more often than I should, I drop $29 on an old-style baseball cap.

The one I’ve been wearing of late is black with an orange button on top and a seriffy interlocked NY also in orange up front. It’s a replica of a cap the New York Giants wore before they abandoned Coogan’s Bluff and the Polo Grounds on 155th and 8th Avenue and moved to Seals Stadium in San Francisco.

It’s the cap Mays wore—the one that flew off his head as he rounded the bases with another base-clearing triple. It’s the cap Dusty Rhodes wore. It was worn by one Foster Castleman, who in the Giants’ final season in town batted all of .162, a full 13-pounds under his playing weight.

What makes these caps perfect is they’re made the way caps used to be. Their brim in particular is malleable. You can crush the things and carry them in the back pocket of your flannel uniform, or, if your playing days are over, your blue jeans.

Lately I’ve taken to wearing my cap like I did when I was a youth. I’ve been popping the brim up like Huntz Hall did in the old “Bowery Boys” pictures in which he played a doofy character called Horace Debussey “Satch” Jones.

I like wearing my cap this way, always did. I like the pressure the brim puts on my forehead; it feels right. I also like how it annoys the shit out of my wife. How do I put this? I think it makes me appear a little dim. I revel in my dimmitude, whereas she looks askance at it.

Back 39 years ago, I brought this fashion to the Seraperos de Saltillo, the team I played for and the perennial cellar-dwellers in the Mexican League. It started with me, and unintentionally, it spread through the roster.

Soon, we had a whole skein of guys wearing their caps in a most unsophisticated manner. Even Hector Quesadilla, our manager, took to popping up his brim. In a league and in an era where things like batting helmets were optional, we even went to bat with our Louisville Sluggers in hand and our silly hats on head.

I suppose someday in the not-so-distant future, I will tire of wearing my caps this way. I will lose the ones I’ve bought or I will need to move onto something new to nettle my wife. But for now, a tip of the hat to the tip of my hat.

Long may she wave.
Posted by george tannenbaum at 7:56 AM