The language of our lives.

My guess, having circled the sun as many times as I have, is that something on the order of 75% of all communications are prevarications. That is, they are deviations from the truth. Or, put another way, they are communications that mislead, either by intent or through lack of skill.

For me, Dashiell Hammett, the great writer behind "The Continental Op," "The Maltese Falcon," "The Nineteenth Murder," and "A Knife will Cut for Anybody," among other works, pointed this out most astutely and semantically.

At the opening of "The Continental Op," Hammett's narrator observes:

Usually in the morning when I get into work, I check my Twitter account. I don't send out tweets--I'll do almost anything not to appear presidential--but I do like to see if others are tweeting about me or this blog.

Because "Ad Aged" is so close to "Ad Age," and Ad Age is more popular than this organ, when I search Twitter using the word "ad aged," it returns this notice:

Beneath the above header is this tile: 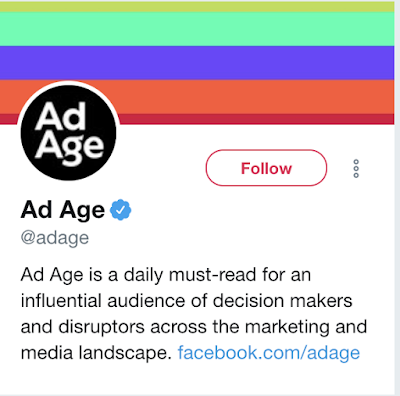 An ad, as it were, for the august trade magazine "Ad Age." Today, after years of seeing this ad, I read its copy.

"Ad Age is a daily must-read for an influential audience of decision makers and disruptors across the marketing and media landscape."

Now, the same copy with meaningless or jargon words highlighted.

"Ad Age is a daily must-read for an influential audience of decision makers and disruptors across the marketing and media landscape."

Now, that sentence deconstructed and redefined:

must-read--what happens if you don't read a "must-read." Or is Ad Age a must-read because its circulation has probably dropped by 90% over the last ten years and if you don't "must-read it," the three or four remaining writers will lose their jobs.

influential--influential to whom? And if they are "influential," what/whom/how are they influencing. I'd rather speak to people regarded as intelligent than influential. Besides, I assume the heads of agencies and holding companies are influential. The chart below, from "The Wall Street Journal," essentially questions how good they are at their jobs. 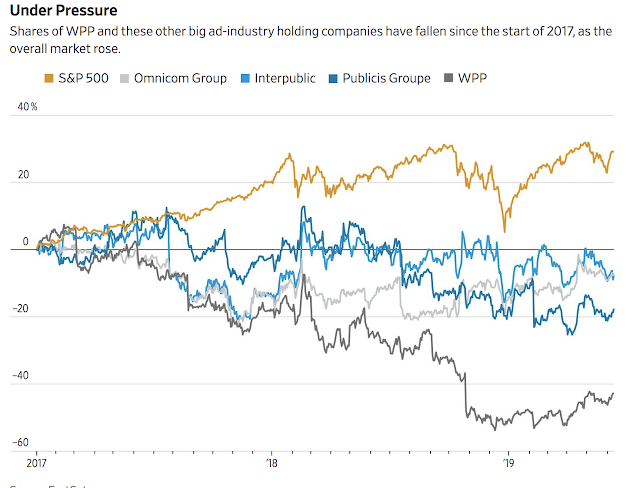 decision makers--How did this phrase come into being? Hmmm, should I press the elevator for 7 or 8? I can't handle that, I'm not a decision maker. I need a decision maker to help me. It's almost lunch as I write this. Chicken salad or tuna salad. White, wheat or rye. Can't someone help me.

disruptors--I assume this is code for someone who is flatulent during a meeting.

Posted by george tannenbaum at 5:24 AM