I'm writing this on Thursday, January 27, 2022. People are calling today Holocaust Remembrance Day, and I haven't paid much attention to that.
If you're a human, and a certain age, every day is Holocaust Remembrance Day, just as every day should be observed as Black History Month. These commemorations should not be confined by the conceit of a calendar. And to give something a month or a day, I think, minimizes its essential universality.
Oppression continues. As do holocausts. And slavery. Let's stay vigilant. Let's keep humanity's inhumanity ever-present, or we'll look at horror as an anomaly rather than as human a condition as breathing or flatulence.
Some years ago there was an exhibit at the Holocaust Museum in Lower Manhattan. I believe it was called "Auschwitz: Not long ago. Not far away." I think remembering that history isn't about the past, it's about the now would be a good lesson for all of us to think about. As William Faulkner wrote in "Requiem for a Nun," "The past isn't dead. It is not even past."
When I was down at the Holocaust Museum, my wife went off to the lady's room. I sat on a wooden bench and watched a video screen play archival footage of some of the lives and families and hopes and dreams destroyed by the systemic hate propagated by the nazis and their many many acolytes.
Suddenly, I got punched in the solar plexus by a bulldozer. I saw this still-frame. I sat through the movie, pasted above, two more times so I could film the film. A record of sorts from a broken-down cosmic jukebox. 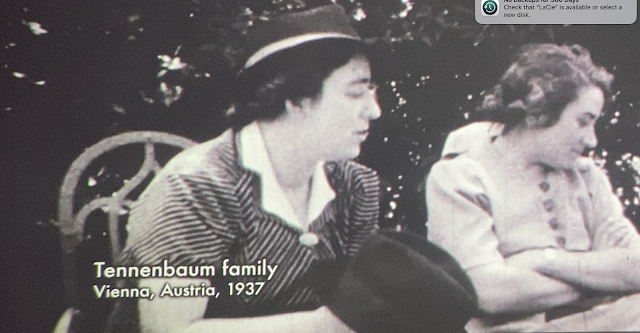 Sure, the spelling is different from how my branch of the Tannenbaums spell our last name. Sure, I don't know if my ancestors were cultured enough to have made the journey from shtetl to Vienna before they steeraged to their particular Philadelphia ghetto. Sure, I don't know if I share more DNA with a McChicken sandwich than I do with the Tennenbaums above.
That's partly the thing about how I wasn't brought up. There was no family. I have no idea where my ancestors came from or how they got here. Don't tell me about Ancestry.com. I don't even know the non-Americanized names of my grandparents. Or what their real last names even were.
I joke, which is what I do best when I'm sad, that I'm a blue-eyed Russian Jew with a German last name who was born on the Feast Day of the Immaculate Conception.

That may come across as funny, but it's deadly serious. Like the fictional "Man Without a Country," there are a lot of us walking about whose lineage is as serpentine as the whorls of a lysergic fingerprint.
If you're an amateur historian like I am, you realize that the history of the world has been for tens of thousands of years--if not hundreds of thousands--a history of cruelty. Slaughter. Slavery. Rape. Starvation. Timesheets.
No one gets off this rock unscathed. And though I believe as Dr. King said that the "moral arc of the universe is long, but it bends toward justice," that's small consolation to those immediately suffering, in fact or through proximity, sensitivity or awareness, our species' current miasma of inhumanity.
I know this is a mean way to write a Friday post.
But it's a reminder.
Be aggressively kind. Don't let up.
Someone needs you.
Posted by george tannenbaum at 6:38 AM