Me and Milton Glaser. 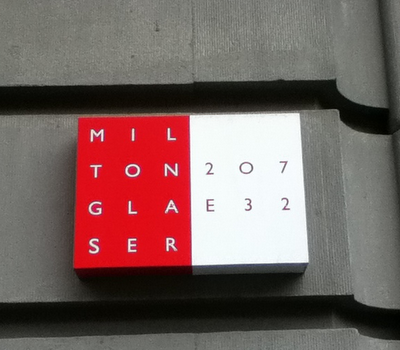 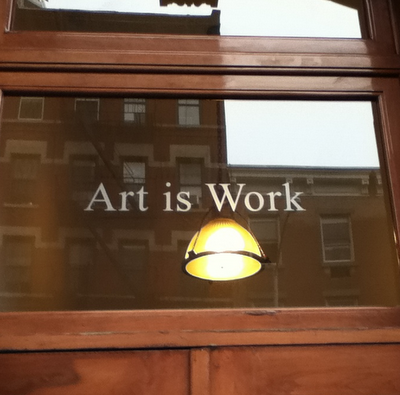 Six months ago I answered an ad in "The New York Times" about a job opportunity--Director of Communications at Columbia University. It turned out the job wasn't right for me for many reasons, but through the interview process I met some people I liked and they liked me. Last week they contacted me to do some freelance for them.

As good fortune would have it, my freelance client's husband is an architect. He shares an office with Milton Glaser. And my client persuaded Mr. Glaser to art direct the piece I am working on. I took three hours off from my regular job this morning to work in his space.

I met Mr. Glaser in his offices which are decorated with his art and memorabilia and things he likes that other people created. Years ago I saw an exhibit of Glaser's work at the Philadelphia Museum of Art. His townhouse had 50 times the amount of work. I could have spent all day there.

Mr. Glaser and I started chatting. Feeling each other out as designers and writers do. Him feeling me out, actually. Am I good enough to write words he would consider using. Fortunately, he liked very much a line I wrote. That seemed to break the ice and he warmed up after that. I was in a fraternity now. We started going over my copy. He ran to another room to get some of his pencil sketches. He draws with pencils that have multiple colors of lead at their tip, colors that vary as the pencil sharpens. He said they unloose his imagination.

Milton presented some thoughts. Talked about his process and some beginning thoughts he (and I) had. Then when he was done, he folded things up and said, "We gotta let it cook a little bit."

The work I'm doing is for a school.

I am the one who is learning.
Posted by george tannenbaum at 11:11 AM

are you for modesty reasons, understating the fact that you have shared thoughtsn with most likely the best designer and communicator that has every lived?