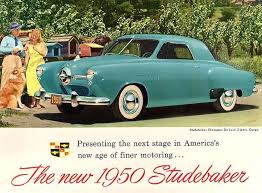 When I was a kid I used to spend a lot of time in the back seat of my father's green 1949 Studebaker. The car was my father's pride and joy as I suppose I was to some degree, too.

We got along, at some level, my father and I. Maybe I idolized him as boys often do their fathers when they're young. Maybe I found the wise cracks he was always making actually funny. Maybe, maybe most likely, I disdained my harridan mother to such a complete degree that any time with my father would be a welcome escape from her termagant clutches.

We drove, my father drove all over the Bronx and Manhattan, my father smoking a big cigar or his giant meerschaum pipe. Either of these would fill the small interior cavity of the Studebaker with thick blue smoke. I was a two-pack-a-day man by association by the time I was seven.

In those days, there were no easy-passes and there were hardly even toll-baskets. When you hit a toll, you stopped, handed some old civil service worker a dime, said 'thank you' and went on your way. Such a process is slower than the Near Radio Frequencies that magically allow us to speed through today's tax collection stations, but they were lovely in a way, and quaint.

Like most men of that era, my father didn't wear jeans when we went on these drives. He wore baggy trousers with deep pockets filled with silver coins. When we approached a toll booth, he'd reach into his pocket and fish out the appropriate coin. On occasion, he'd fish out two coins, giving one to the toll collector and one to me. I responded to the jingle in his pocket like Pavlov's dog. A nickel would get me a candy bar. A quarter, two comic books, or five packs of baseball cards.

I've always remembered the jingling of coins in my father's pocket. In fact, it reminds me of much of what is going on in the worlds of technology and marketing today.

Technologists reach into their pockets and jingle coins like Google Glass, or Reddit or even Facebook and ad people act like little kids about to get some change. These technologies are undoubtedly cool and interesting and maybe even useful. But are they advertising vehicles? Do we respond to their eclat because they are valuable or simply because they are new and free.

We are almost 20 years into the digital revolution and I've seen very little marketing that is revolutionary. I've yet to have a conversation about a brand. I've yet to go to a brand's Facebook or Pinterest page, or respond to an ad in any of those channels.

Like driving with my father, I think a lot of people are being duped.

Posted by george tannenbaum at 9:46 AM

You are the last of the line George. The human thread back to the Mad Men era. A one of a kind. Really.

As much as I like George, I can only hope for advertising's sake that you comment is not true.