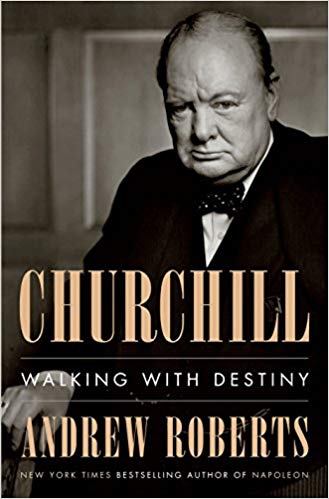 As Churchill is warning his country about the rise of Hitler, he is roundly ignored. As the Nazis usurp or invade country after country, Parliament and the papers are debating various forms of gossip. As Hitler built his army from 100,000 troops (the Versailles-mandated limit) to almost three-million, against Churchill's warnings, England, and the world fiddled.

Even after the horror of Kristallnacht in which eight-thousand Jewish shops and 1,688 synagogues were ransacked, 267 synagogues were burned down, 100 Jews were killed and 30,000 sent to concentration camps, Churchill's many warnings were ignored. He was mocked as a war-monger.

Today as Trumpism and the anti-democracy radical right seeks to pervert ancient human rights like one-person one-vote, or they ignore the overwhelming evidence of climate change, or they once again permit coal plants to spew mercury into the air, our so-called news media is neck-deep covering trivia and gossip.

For instance, here are a few headlines from Monday, January 7, 2019. As the world crashes down around us, the paper of record, "The New York Times," covered these key stories:

See the statement-making clothing and accessories on the red carpet.

A Different Kind of Comfort Food for an Italian Chef
To Go Bare Down There?

How to Make a Bucking Bull: Good Breeding and, Just Maybe, a Cow’s Love

Even Rubert Murdoch's cheery neo-Fascist "Wall Street Journal,” the paper of choice of the malefactors of great wealth, reported on these seminal topics:
This Alabama Quarterback Wants to Be Your Insurance Salesman

$110 Million Malibu Mansion and the Biggest Luxury Buys of 2018

Is Red Wine Really the Cause of That Headache?

The Case for Buying Less Clothing

Colored Diamonds Expected to Shine in 2019

I won’t even go into what must be derisively called television news. News which is so absent in its coverage of anything but ratings-bait that it is a serious threat to our nation.

Vapid is a threat to serious.

And without serious—real consideration of real issues in a thorough and fact-based manner—we no longer have a civilization. We have instead a “trivialization.”

This trivialization also pertains to the advertising trade press and our industry. While they cover things like Gwyneth Paltrow’s latest 3:09 “spot” or a multi-million dollar 4-minute spot for a greeting card that’s gained fewer than 10,000 views in almost a week, it seems to me…

The advertising trade press has missed the important stories of our times. Where were they when giant agencies were shrinking from 1,500 people to 300 or fewer?

The advertising trade press ignores the proliferation of fake ads that have rendered most award shows—and maybe the credibility of most agencies—all-but-meaningless.

The advertising trade press is mute on wage-stagnation and attrition, and the disparity between holding company salaries and agency salaries.

The advertising trade press seldom points a finger at those clients who, seemingly every-year or so, hold a six-month review and fire their incumbent.

The advertising trade press disparages people without full-investigation and/or follow-up reporting. In the process they damage their careers and their reputations.

My point is simple.

There’s a lot going on in our industry that—because the trade press seems bent on the banal—doesn’t get covered. Or gets covered badly or in a half-truthful way.

So, instead people go to Dave Trott and Dave Dye out in Merrie Olde England. Or Bob Hoffman and Rich Siegel on the left coast. Or even me, in Fun City.

None of us get paid. But we take our job of covering the industry we love seriously. And we work hard at it.

By the way, here's a closing thought from Carl Ally--probably from the late 1960s or early 1970s when he ran the best agency in the world. No one wants to be a peasant anymore. No one wants to do the work.

It seems most people settle for charlatanism.

That's where the money is. 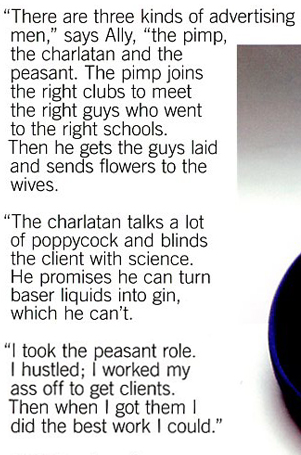