It's 26 hours or so before the Superb Owl as I write this and I already know the game and its surroundings will upset me.

I've been a city-dweller all my life. Surrounded by the cacophony of a trillion car horns, idling diesel engines, wicked garbage men who like nothing more than throwing old tin cans full of fish offal off the brick walls of piss-stained alleys at two in the morning.

Like most New Yorkers, I know how to say fuck you in all 201 of those languages--and mean it--and in a few dozen more that have yet to fall off to Tower of Babel.

Let me tell you something, all you open plan office people. All you talk on the cellphone 19-hours-a-day people. All you hip-hop music from the heavy-bass-tuned-car people.

Noise, constant noise, is the enemy of civilization.

And in our forced state of Covid-isolation, where for many there is too much quiet, we take solace in noise and are quickly losing our minds amid the clamor.

Noise was the worst effect of the trump pussidency. The constant vomit of stupidity, cruelty, hate, racism, stupidity, intolerance and bad spelling and worse punctuation. (I know I said stupidity twice. I could have said it more times.)

Noise then repeated on 91 on-screen graphics on 191 cable channels with low-cut blondes and low IQ well-coiffed mannequins repeating the noise until we are slowly dead above the neckline.

I have heard for ten or fifteen years now how advertising has to become part of culture and for the life of me I don't know what that means or why.

Popular, I get. Imitated, I get.

But part of culture leaves me at a loss.

Mostly because I don't even know what American culture is. And whatever it is, it surely forgets that people like me--who would rather read that be shouted at--exist.

And if you want an escape from Amerika--even for just a few bloody moments, pick up and read Natalie Haynes "A Thousand Ships." 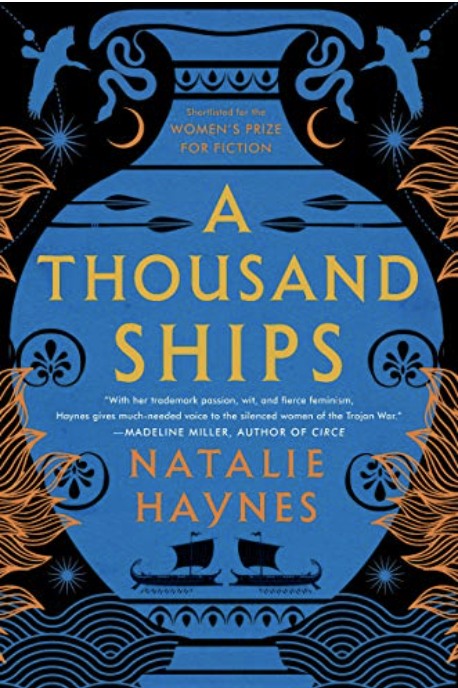 It's bloodier, uglier, noisier and better than anything else you can do with six hours and I guarantee you, though the stories are five-thousand years old, you'll learn something about being alive today, being a father, and wrestling with the gods who thwart us and mock us at every turn.

There's more life in it the ol' Greeks than in one-thousand Superb Owls. And you'll feel more alive for having massaged your brain.