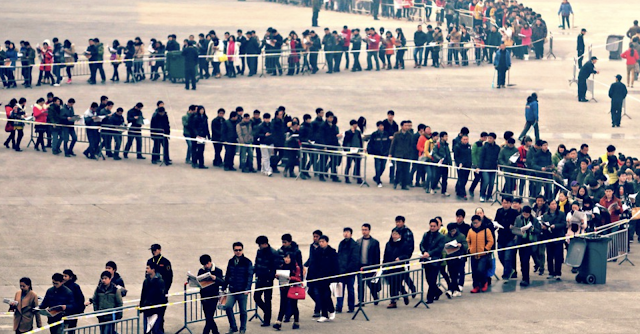 It could be a function of growing older, virtually every store I go into, every airplane I fly on, every restaurant I eat in has service that's slightly worse than you'd find in a Soviet gulag.

It's easy to find exigencies to blame bad service on. People my age grew up in a different world--I'm told--and have different expectations. Also Covid. Also cell phones. (Since everyone seems to spend the day staring at them.)

But I think the issue is bigger. And I think bad service is not only endemic, it afflicts the advertising industry as well.

Worse, I think the roots of bad service--those things that lead to bad service--are built into the very structure of how companies treat people. Whether those companies are a bagel shop that specializes in getting your order wrong. A big box retailer that's always out of what you need. Or a holding company advertising agency that combines those two derelictions almost every day.

To my mind what's killed service--no matter what kind of business you're not getting it from--is the disconnect between the work you do and the future you have.

What's the point, after all, of working hard if your pay is low (while those in the C-Suite make 300x or more your salary) and will remain low until the day you're fired or you quit.

It's some rendition, really, of the old GIGO acronym: Garbage In; Garbage Out.

When you treat people as if they're replaceable parts and they can be fired any minute, they'll do very little for you.

And why should they? After all, if they work hard and do good work, they won't be rewarded and they can still be fired at any minute. Why go the extra mile for a company that won't give you an inch? Why bust your ass for a company that will only bite your ass down the line?

Why should you give of yourself when you get nothing in return? Or, you don't care about me, why should I care about you?

Back when I was 20, I got a job as a night clerk, working the 4PM to midnight shift in the biggest liquor store in Chicago. A cavernous place on Rush and Walton across the street from various brothels, run by the Bragno brothers, whose first names I forget, primarily because I hadn't the temerity to even think of calling either of them anything but Mr.

I learned a lot about life from the Messers Bragno, a lot about how owners should treat even their lowest-level employee, which I was. Especially since I worked there when I wasn't of legal drinking age, using my older brother's name and social.

First off, at Bragno's the bosses worked. They waited on people. If someone needed a bag carried out to their car--either of the Bragno's would do it. Second, they paid well. At the time minimum wage was $2.30/hr. and they paid me $3.50, plus six guaranteed overtime hours at $5.25/hr. Third, they gave me a path toward advancement. They put me in charge of making sure the cigarettes at the cash registers were always stocked, and the miniatures and pints, as well.

Then, they let me wait on customers on Saturdays, so they taught me a bit about various wines and spirits. Fifth, when I worked nights, they always paid a cop to sit in the back and hang out. There was a button I was supposed to press in case there was a hold-up, but I never even came close. The cop made sure of that.

Finally, they always said please and always thanked me for doing my job well. And when my father would ring up the shop and ask me to bring him home a bottle, the Bragno's were always good for a nice discount--for the father of one of their employees.

I think that in many ways--if you have the power to extrapolate--many of the things the Bragno's did worked to keep their people happy and being dedicated. Many of the things they did apply to how people should be treated--and how they're not treated today.

People want more than a paycheck from a job.

They want some sense of belonging and loyalty.

They want some sense that they have a path to growth.

They want tasks that challenge them and that they can learn from.

They want an outlet for their ambitions.

If they come into a job poor, they don't want to leave four years later, or six or eleven almost as poor.

I am truly afraid that those simple, basic, human truths are forgotten by just about everyone who employs anyone else. There's this topsy-turvy notion that employees are supposed to feel lucky that they have a job. They're, therefore, supposed to give without expecting to get.

I was always one of those people who recoiled when someone in an agency would cluck, "advertising is a service business." I believe we make a product--great ads and great thinking that drives reputation and sales. Servicing the client, is of course, a part of that. Listening. Responding. Challenging.

But every business has a commitment--or should have one--to those who work for them.

To serve their need for growth, fulfillment, compensation and more.

Without serving employees service everywhere will continue to suck.