You have to make something. 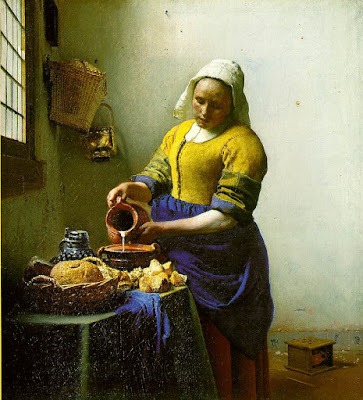 I finished Chaucer's "Canterbury Tales" last night and one of the last stories, "The Canon's Yeoman's Tale" concerns alchemy--the pseudo-science of turning base metal into gold.

As I read this wonderful story I couldn't help but think of Goldman Sachs and the like. They are modern-day alchemists who turn nothing into great amounts of wealth then disappear before anyone figures out they are perpetrating a flim-flam. As long as there are people who are buying what they are selling the scam goes on. Once greed is suspended, even for a second, there is collapse.

Now, there is a report on the radio about the collapse of Dubai--the indoor ski slopes, the skyscrapers half a kilometer high. It appears people might stop buying what Dubai is selling. Then, of course, I started thinking about advertising agency holding companies. Have they any reason for being? Do we really need the Chief Risk Officers they provide?

My question for all of these sort of entities is: "What do you make?" What value do you bring?

Today I went to see Vermeer's "The Milkmaid" at the Met. It's quite a painting. A living breathing thing that seems almost luminous. It is only 18 inches tall, and probably about 14 inches wide. But I could see what Vermeer actually created and in my own simplistic way, I could understand its value.

Goldman's CEO Leonard Blankfein claimed that bankers do "God's work." I suppose Blankfein would say the same of advertising holding companies. After all, a few people have gotten quite rich by them.

But neither have left behind anything like a Vermeer.
Posted by george tannenbaum at 5:11 PM

Your blog keeps getting better. I think aggravation is good for you.