Botero on the beach.


As we do both Saturday and Sunday, we piled into our 1966 Simca and sped (as much as the 48-year-old machine can speed) 20 miles up the coastline to Rye, New York. There, we spread open the doors and Whiskey galloped out onto the sand. I quickly grabbed the float I toss into the water for her to retrieve, and that was our next two hours, me tossing, despite my partially torn rotator cuff, and Whiskey swimming out to fetch what is hers.

About an hour into our routine, three squat Mexicans, two middle-aged men and a woman, walked onto the beach. The men dragged an inflatable two-man kayak to the edge of the water. Then they wend back to their station wagon and carried out fishing tackle, buckets and a cooler the size of a small filing cabinet.

The woman, the spouse of one and sister of the other, spent the whole time looking nervous. Her men were about to go out to fish for porgies in a craft more-suited to a small backyard swimming pool than the Long Island Sound. The men, as men so often are when they're doing something foolish, were completely nonchalant.

The two men, their physiques reminded me of the old Jimmy Rushing song, "Mr. Five by Five," each straddled a gunwale of the small boat, one leg in the water, one in the boat. They paddled in short, determined strokes until they were out by some rocks about a mile from the shore. Porgies lurk in the rocks, I was told.

Meanwhile, the wife/sister, also five by five, reclined on a red wooden bench that was stationed between the parking lot and the edge of the sandy beach. Anticipating a long, nervous wait, she reclined on the bench like a painting by Botero. 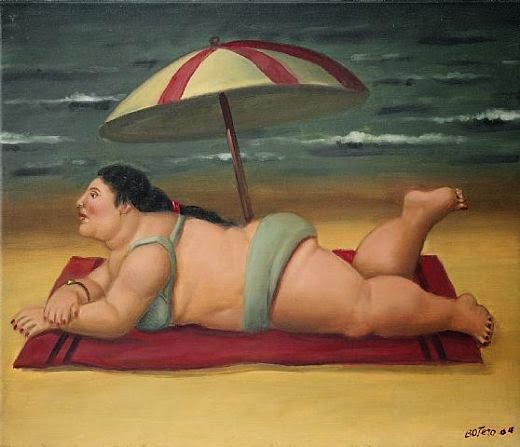 She had a pair of binoculars and she watched over her men like a 19th Century Sea Captain's wife on a widow's walk. She'd get up and pace nervously. Was it really worth it, she fretted, all this worry for a few porgies.

After about two hours, as Whiskey tired, the men paddled in.

"Didja catch any," I shouted their way.

They dragged their small boat, buckets, rods and cooler up to the bench where their woman was sitting.

I accoutered Whiskey with her leash and we headed to the boardwalk about a mile away to dry off in the sun.

Posted by george tannenbaum at 3:00 PM