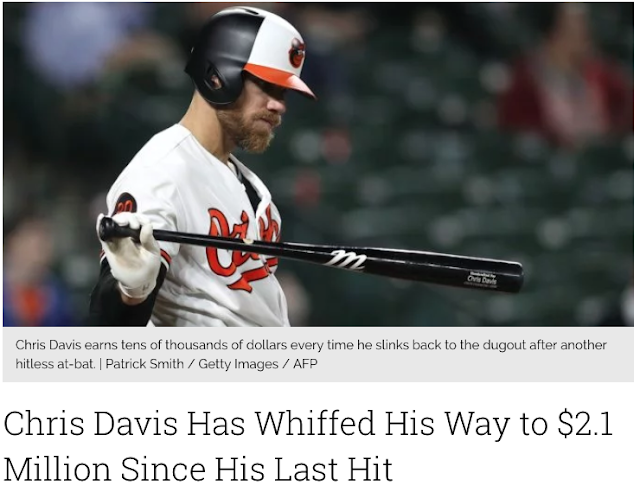 On Saturday, long before Tiger Woods gained a victory at that horribly, white-supremacist-named golf tournament, The Masters, a bigger event happened in the ever-expanding world of sports.

Chris Davis, the worst hitter in Major League Baseball history (last season he batted a paltry .168—62-pounds below his playing weight) finally got a base-hit. Davis was hitting an even-more paltry .000 at the time, having gone 54 straight at-bats, going back to last season, without hitting a ball safely.

It all brought me back to my one long season in the Mexican Baseball League, which probably took place before you were born, way back in 1975.

After about a month in the Mexican Baseball League, manning the esquina caliente--the hot corner, for the Seraperos de Saltillo, I hit a rough patch. A very rough patch.

I had been hitting in the high-.300s, with decent power and it looked, however feebly, that I might perhaps have more of a career in baseball than I had imagined. Even more than I imagined after I had eight or a dozen beers in me.

Hector Quesadilla--the Seraperos' legendary manager had great faith in me. That boosted my confidence. Accordingly, I was seeing the ball as big as a grapefruit, just chugging to the plate, waiting to be smacked.

Then it happened. As it happens, at times, to all of us.

That which we have done all our lives, done with ease, done without even, perhaps, thinking, we can no longer do. We lose, sometimes suddenly and almost always inexplicably, our abilities.

Or as the great Roman poet Horace put it two-millennia ago, “non sum qualis eram.” I am not now what I once was.

I went a game without whacking the pill. Nothing unusual in that. It happens all the time. That's why DiMaggio's 56-game hitting streak was so notable. Everybody, even the greatest players, have a game or two every so often where they fail to get good wood on the ball. Or fail to hit the ball safely. Others have games filled with hard luck. They hit the ball well, but right at people.

Before I knew it, I was 0 for an entire week.

“Tal vez deberia sentarme yo abajo,” I said to Quesdadilla. “Maybe you should sit me down.’

“No,” he answered, “Le diste en su manera de salir de ella.” You hit your way out of it, he said.

So, I kept playing. And I kept 0-for-fouring.

I tried everything. I pulled my bat further back. I moved my hands further forward. I moved in on the plate. Out from the plate. Up in the box and back in the box. I shortened my swing and crouched like Minnie Minoso. I stood up tall and swung from my heels like Willie McCovey.

One afternoon, as I was in the middle of my 0-for-streak, I even tried to bunt my way on from the left side of the plate, figuring with my speed, a decent bunt and two fewer steps to first might do the trick. No dice. I was chucked out by a step and a half.

In the beginning of my 0-for slump, I was at least hitting the ball with some authority, hitting it hard. But along the way, as I tweaked and tinkered, I pretty much stopped making anything but cursory contact.

“Non sum qualis eram,” I said to myself. I am not now what I once was. Harsh, when you’re sixty or seventy.  Horrifying when you’re 17.

My batting average was falling like a runaway elevator. And all the while, Quesadilla kept me in the line-up, saying, as he said, “Le diste en su manera de salir de ella.” Hit your way out of it.

Nearing the end of three weeks my batting average was approaching what baseball people call “the Mendoza Line,” that is, a mark of batting futility named for a journeyman infielder from the 1970s called Mario Mendoza--who hit below .200. Worse, I was afraid they'd come up with new jargon: The Navidad Nexus--when a player fails to hit his playing weight.

(By the way, Mario Mendoza, lasted eight years in the majors, winding up with a .215 batting average. After he retired from Major League Baseball in 1982, Mendoza played in his native Mexican League, where he had a .291 career batting average, and in 2000 was inducted into the Mexican Professional Baseball Hall of Fame.)

I weighed in at 190 in those slimmer days, and my batting average was looking to match that sad number. The hits kept not coming. And Quesadilla kept saying "Le diste en su manera de salir de ella." But I wasn't hitting my way out of it. I was stinking up the place.

It's not a pleasant thing in any profession when you're confidence gets a one-way ticket to Terry Malloy's Palookaville. But that's what happened to me. I was the Old Man and the Sea. He went 84 days without a fish. His life was over. Even the boy who was always by his side had left him.

I grabbed a bat and walked to the plate.

Hector called from the dugout in English. “Put good wood on the ball.”

I forgot about all the adjustments I had gone through in the previous 19 games. I just went up to bat. “Put good wood on the ball,” I repeated to myself.

I hit a line drive off the wall--actually through the wall--in left-center. The ball cracked the wooden fence and stayed there. A grounds-rule double. My first hit in 19 games.

From there on, things returned relatively to normal. I started hitting again, my average began to reverse its descent as did my confidence. I had hit my way out of it, as we usually do when we’re mired in a slump. When we can’t put wood on the ball. Can't do the job we want to do.

Even today, when I’m stuck on something, I look over to an imaginary bench. I see Hector there, calm and Buddha-like.


Hit your way out of it.

Posted by george tannenbaum at 5:46 AM