I crock, therefore I am.

What’s more, as claims of “innovation” increase, crockiness increases with it. For example, if you hear some futurist at some conference talk about AI eliminating bias in hiring, you can be sure that the futurist knows almost nothing about anything except making grandiose claims.

People, I’d say, have been trying to eliminate bias since Hector was a pup. No matter what social scientists and regular scientists do, bias will almost always find a way to assert itself.

Don’t get me wrong, a lot of technology is really wonderful, and I’d hate to live without it. But along with nearly every advance come drawbacks that all but mitigate most gains.

That is, there's no way, though alchemists have been trying for centuries, to turn base metal into gold.

It’s a little like building wider roads to lighten traffic. Sooner or later (usually sooner) the traffic overwhelms the new road, and we’re just as bad off as we were when we started.

Nevertheless, technology marches on and as it marches, overblown claims, the easily gulled and the unquestioning will march with it. If I hear about one more technology that will take carbon out of the air, or plastic out of the oceans, or even the Knicks out of the cellar, I think I may crawl permanently under the nearest mossy rock and only come out on Wednesdays, when Carvel offers two-for-one Sundays. 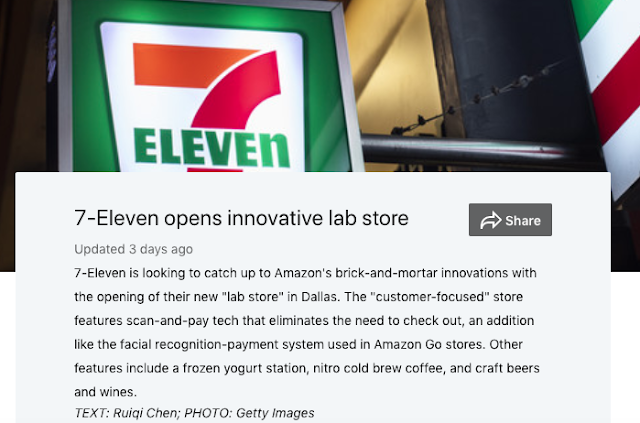 I’m a bit roiled right now about technology because not long ago the article above about the crappy convenience store 7-11 was all over my Linked In feed. You can see it here.

The idea of 7-11 opening an innovation lab store makes me a little nauseous. There’s a 7-11 down the block from me that I have never shopped in. But when I worked in Boston there was one near my apartment, and if I worked past eight, it was the only nearby store that was still open when I walked home.

I’d walk in about twice a month, past the impaled hotdogs slowly spinning under incandescent lights since the Nixon administration. Past the Slurpee machines and the Big Gulp cups whose contents could slake the thirst of an army regiment after a 20-mile-march.

If I finally found something I could cook, I’d then wait at the counter while surly clerks argued about the winning lottery numbers or some particularly difficult word jumble.

That’s the store that’s opening an innovation lab. Now, I suppose, in their experimental stores, sophisticated scanners can read my irises and predict my buying habits. All at once, the Quantum-heated hotdogs will pop-off their spears and onto a stale bun. A 96-oz. vanilla-kale-kombucha-flavored Coke will pour itself, and insert in its bio-degradable plastic lid a bio-degradable straw made of roadkill and swamp algae.

All will be right with the world.

My two-cents about innovation are pretty simple. Before you test, before you prototype, before you iterate and ‘fail fast,’ try some things first that are un-innovative.

Try to sell things people want. Try to pay attention to your customers. Try to treat people like humans, with a little care and respect.

The same holds true, of course, for ad agencies. Try to start conference calls on time and send out decks beforehand. Go easy on the trademarked processes and roadmaps. Focus on listening, telling the truth and on doing good work.