Me and my idol, Joseph Mitchell.

There are a few people who have known me a long time and who don't hate me or who aren't bored by me.

Some of them I know in real life. More, it seems, know me from postings like this one, or through some connection we've made online. Like a nebula meeting a mist of ether.

For whatever reason or reasons, they tolerate my many quirks and my even more numerous mania. I say mania, because like many people who consider themselves a 'sort-of-writer,' I can get intensely focused on things that seem important, valuable, or worth-noting only to myself. These are the things I come back to week after week, month after month, and yes, decade after decade. Idee fixe, the frogs might croak.

Of late, New York, my one and only home, the Castor to my Pollux, the Damon to my Pythias, the Hero to my Leander, has taken a beating. There was a mass-shooting on the subway earlier this week. And attractive news-readers can be seen flapping their botox-ed lips about the myriad dangers of the city. It's a pre-apocalyptic end-of-the-world narrative. Those usually arrive during periods of massive change--like the one we're living through now, or say ancient Rome during the rise of Christianity.

My guess is, like a lot of data, the perils of Gotham are driven more by a narrative than reality. I was uptown, downtown, all around the town for the last ten days. Attending a memorial service held at Columbia University, down on MacDougal for an old-ad-peoples' periodic dinner, and walking around dogwood- blossoming Central Park, where everyone's individual beauty is only bettered by their even-more-beautiful dogs.

Mitchell came to New York in the 1930s and lived here until he died in 1996. He worked and wrote at "The New Yorker" for most of those years--and as Oedipus loved his mother, he loved this cursed set of islands in a stream--and the Bronx as well, which is the only one of New York's five boroughs that's not an island.

Below is four minutes of Mitchell.

I can't think of a better way to spend a moment cherishing the glory of the world and of life itself, no matter how awful it is. 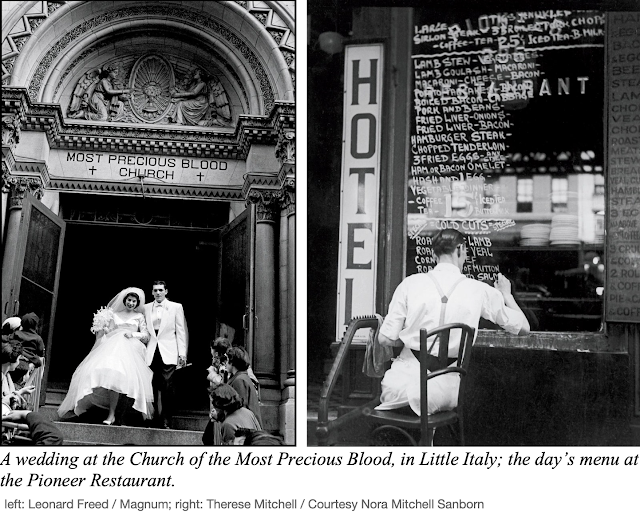 What I really like to do is wander aimlessly in the city. I like to walk the streets by day and by night. It is more than a liking, a simple liking—it is an aberration. Every so often, for example, around nine in the morning, I climb out of the subway and head toward the office building in midtown Manhattan in which I work, but on the way a change takes place in me—in effect, I lose my sense of responsibility—and when I reach the entrance to the building I walk right on past it, as if I had never seen it before. I keep on walking, sometimes for only a couple of hours but sometimes until deep in the afternoon, and I often wind up a considerable distance away from midtown Manhattan—up in the Bronx Terminal Market maybe, or over on some tumbledown old sugar dock on the Brooklyn riverfront, or out in the weediest part of some weedy old cemetery in Queens. It is never very hard for me to think up an excuse that justifies me in behaving this way (I have a great deal of experience in justifying myself to myself)—a headache that won’t let up is a good enough excuse, and an unusually bleak and overcast day is as good an excuse as an unusually balmy and springlike day. Or it might be some horrifying or unnerving or humiliating thought that came into my mind while I was lying awake in the middle of the night and that keeps coming back—some thought about the swiftness of time in its flight, for example, or about old age itself, or about death in general and death in particular, or about the possibility (which is far more horrifying to me than the possibility of a nuclear war) that after death many of us may find out (and quite rudely, too, as a friend of mine who was lying on his deathbed in a hospital at the time once remarked) that the eternal and everlasting flames of Hell actually exist.

-------
-------
Ever since I came here, I have been fascinated by the ornamentation of the older buildings of the city. The variety of it fascinates me, and also the ubiquity of it, the overwhelming ubiquity of it, the almost comical ubiquity of it. In thousands upon thousands of blocks, on just about any building you look at, sometimes in the most unexpected and out-of-the-way places, there it is. Sometimes it is almost hidden under layers of paint that took generations to accumulate and sometimes it is all beaten and banged and mutilated, but there it is. The eye that searches for it is almost always able to find it. I never get tired of gazing from the back seats of buses at the stone eagles and the stone owls and the stone dolphins and the stone lions’ heads and the stone bulls’ heads and the stone rams’ heads and the stone urns and the stone tassels and the stone laurel wreaths and the stone scallop shells and the cast-iron stars and the cast-iron rosettes and the cast-iron medallions and the clusters of cast-iron acanthus leaves bolted to the capitals of cast-iron Corinthian columns and the festoons of cast-iron flowers and the swags of cast-iron fruit and the zinc brackets in the shape of oak leaves propping up the zinc cornices of brownstone houses and the scroll-sawed bargeboards framing the dormers of decaying old mansard-roofed mansions and the terra-cotta cherubs and nymphs and satyrs and sibyls and sphinxes and Atlases and Dianas and Medusas serving as keystones in arches over the doorways and windows of tenement houses.
-----
-----
Below, I've cut and pasted a bibliography of Mitchell's works. If you'd like to hear the overture before the full Ring Cycle, below that, I've pasted one of my favorite of his work.
If you want to buy something with real money, buy "Up in the Old Hotel." It's a large collection of his work. If you want something slim you can slip in your jeans' pocket, pick up "Bottom of the Harbor."
We would all be better off with a little less quotidian bullshit and a little more Joseph Mitchell.

Collections from prior newspaper works[edit]

Collections of work from The New Yorker[edit]

All works from The New Yorker[edit]

Posted by george tannenbaum at 7:43 AM