Copywriters in the Machine Age. 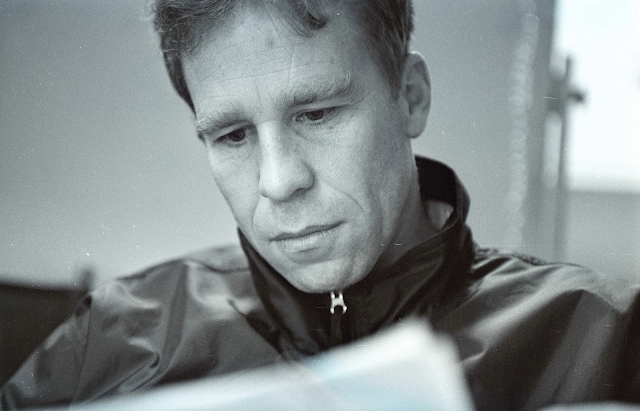 Not too many years ago when the agency called Ogilvy was still in business, there was a corps of writers who worked under the aegis of Chief Creative Officer, Steve Simpson, on IBM.

I say corps, but it was really just me and another writer, a friend, called Tom Bagot. Tom died from pancreatic cancer a few years back, leaving a wife and three kids behind. In so many ways the world is poorer for that loss.

Tom and I and Steve, too, were writers of the very old school. While the rest of the agency was as empty as herschel walker's head, we were at our desks, usually by 7:30 AM, and either talking about the work we were doing, or more often doing it. You could hear the clack of our keyboards like the sound of a hundred lab rats gobbling down their kibble.

In the best of relationships, whether they're professional or amorous, a certain kind of competition exists. You know the person sitting or lying alongside you is superior in some manner and you, therefore, redouble your efforts just to keep from sinking.

Tom and I were often charged by Simpson "to figure things out." Doe-eyed planners or account people would sneak up to us and tell us about some problem the client was having that no one could figure out. They would usually email us terabytes--or even yottabytes--of nearly cuneiform deckage--with no commentary whatsoever and then back slowly away from us like a 1950s vacuum-cleaner salesman who's poured soot on your white living room carpet.

That was the copywriter equivalent of the gun going off at one of those late 19th Century eight-day-bicycle races. Tom and I were friends. We helped each other. We answered questions for each other. We'd even run out and pick up breakfast for each other.

But we were also two gold miners in 1850s California. We were both looking for a vein and we knew that our finding it meant we could only be so amenable to the other guy.

That's not macho posturing or male-meanness. I know the current of today preaches collaboration--many times, collaboration above unique quality. But, as the Soviets may or may not have learned as they tried to propagate the millenarian idea of reconstructing human motivation for the betterment of all, from each according to their abilities, to each according to their needs, legislating kindness or amity is often a race to a dark-pool of lassitude.

Tom would often say to me, after three of four hours of cranking when we'd emerge for air--each of us with 50 headlines and one-thousand words of copy, "You are a machine."

I get that a lot today. I whirr and grind and keep on ticking.

But I never considered myself a machine, or in any way unusual.

I considered agency work much as my scraggly-bearded forerunners considered work in the sweatshops.

We get paid by the piece, don't we? Next!

If I can't outthink you, I'm going to outwork you.

Or sweat while trying.

The thing I've learned to do to survive in business is, I suppose, machine-like. You get paid to work, so work. Write a lot of stuff. Draw a lot of doodles. Think a lot of thoughts.

But it's better to edit from a lot than a little.

Posted by george tannenbaum at 8:11 AM