The Greater Fool Theory and Advertising.

There's a theory in modern economics--by modern I mean it probably goes back to the Tulip Bubble in the 16th Century, the South Seas Bubble in the 18th Century, or the Credit Mobilier Bubble in the 19th Century. It's called the "Greater Fool Theory," and to my jaded eyes, it does much to explain the ad industry today. 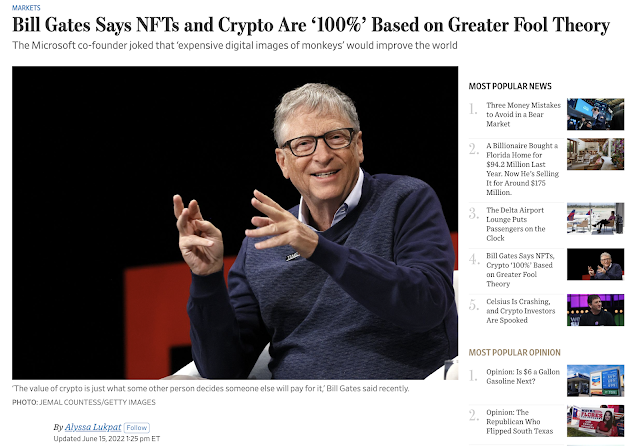 The theory was mentioned by Bill Gates (an old-fashioned billionaire, in that he made something) in Wednesday's "Wall Street Journal." I won't bother pasting the article here because the Journal has a paywall that's harder to penetrate than Donald trump's cranial merkin, but the headline is above.

For now, though, it's Friday, let's take a minute and think about "the Greater Fool Theory." It's a pretty simple economic truth. The Journal defines it this way, "the notion that overvalued assets will keep going up because there are enough people willing to pay high prices for them."

In other words, if enough people buy into a particular lunacy, they will bid its price up until, somehow, sanity prevails.

When I think about how many shiny objects clients and agencies have chased over the last 20 years, re-jiggering their businesses to be "digital," or "digital first," or "mobile first," or "metaverse first," or about "conversations," or "story-telling," or "information graphics," or "agile," or "interactivity," or whatever.

These inchoate and wafer-thin concepts could all be filed under the heading of "This Will Change Everythings." Silly little nothings that will, it's alleged, revolutionize the human brain and, therefore, human behavior and change what is important and what matters.

Agencies and clients bid up the value of these empty ideas. They proclaimed that things that made sense for years, millennia, for ages no longer mattered, and for whatever reason people would want to have conversations about Saran Wrap or Hot Pockets. That be-spangled influencers would change marketing forever and ever.

I don't know what the pith of the latest Greater Fool Theory will be coming out of Cannes. But I know it will be declared. And people will be holding up faux trophies, showing off their rewards for Greater Foolishness.

The genesis of the Greater Fool Theory is similar to the impetus behind a lot of Ponzi Schemes.

That there's a short-cut to reaching people and selling goods, services or reputation. That somehow hard work and discipline and talent applied can be superseded by magic.

Around tax time, GeorgeCo's Chief Financial Officer dropped by my little ramshackle cottage by the sea.

I was in the middle of working on one of those clients and didn't really give her question due consideration.

Some of these clients, I'll admit, were small. Some had market-caps (before the recent crash) in the $30 Billion range. Some were still working on their endless rounds of investor decks.

But they all had one thing in common.

Very few people, including their own C-level employees, knew what they did and what their unique selling proposition was. In short, every one of these companies needed some essential definitional work.

They needed to determine and explain who they are, how they behave, what they sell, who they sell it to and what they do differently.

Finding the simple, timeless, human truths about a company is what advertising, at its best, can do. Identifying that core has created more wealth for more people and more businesses than any technology or any Greater Fool gizmo. More wealth--enduring wealth--than any complex collateralized debt obligation or identity-stealing data legerdemain.

Not castles in the sky. Nice solid homes with concrete and rebar foundations.

It's hard work. Building those homes.

It's also all I know how to do.

So I'll keep doing it.

Until no one will any longer pay high prices for my services.

At that point, I will be the Greater Fool.

And I'm looking forward to that day.

I could use the rest.