I never sang for my grandfather. 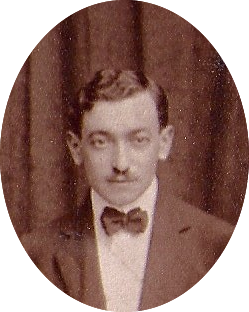 This weekend as we convened in darkest New Jersey to break the Yom Kippur fast, a 19th cousin 43 times removed revealed to me that she had a family portrait that included my father's parents, my grandparents as well as my Uncle Slappy and my Uncle Oscar.

I had, briefly, known my grandmother and my father's brothers, but my grandfather, Morris, died before my father was even bar mitzvah'd and I had never even seen a picture of him. Until Sunday night.

Morris was a tailor in West Philadelphia. Family legend had it he was the only tailor in West Philly who didn't know how to sew. I can believe this. Both my father and my brother have the manual dexterity of a clubfoot, though I am actually pretty adept with a needle and thread, having obviously taken after my harridan of a mother in that department.

When you get a photo of a "close" relative you have never seen before you examine it to find yourself. Are those my eyes? My ears? My cheekbones? My chin? Is he tall and endomorphic as I am? I find none of me in Morris. Except that his left eye is more closed than his right, his eyes are un-even. As mine are in many photos of me.

Whenever I think back on my family--the people I never knew, who, at an early age threw me to the wolves and demanded I fend for myself--I think of Rod Steiger in Sidney Lumet's 1964 movie "The Pawnbroker." I become woozy, disoriented, nastier and more misanthropic than usual. I want to be left alone.

I started this blog when I was unemployed and needed an outlet for the writing dexterity that resides in my fingertips--the dexterity my grandfather lacked in his small, basement tailoring shop. I know what I write is supposed to be about advertising. But sometimes you fuck up and write about lives you never knew.
Posted by george tannenbaum at 9:23 AM

I started reading your blog relative to its advertising commentary, but continue to be a big fan due to the character pieces - thank you for them.

Who is this "19th cousin, 43 times removed?" Could this be the one-and-only nan?