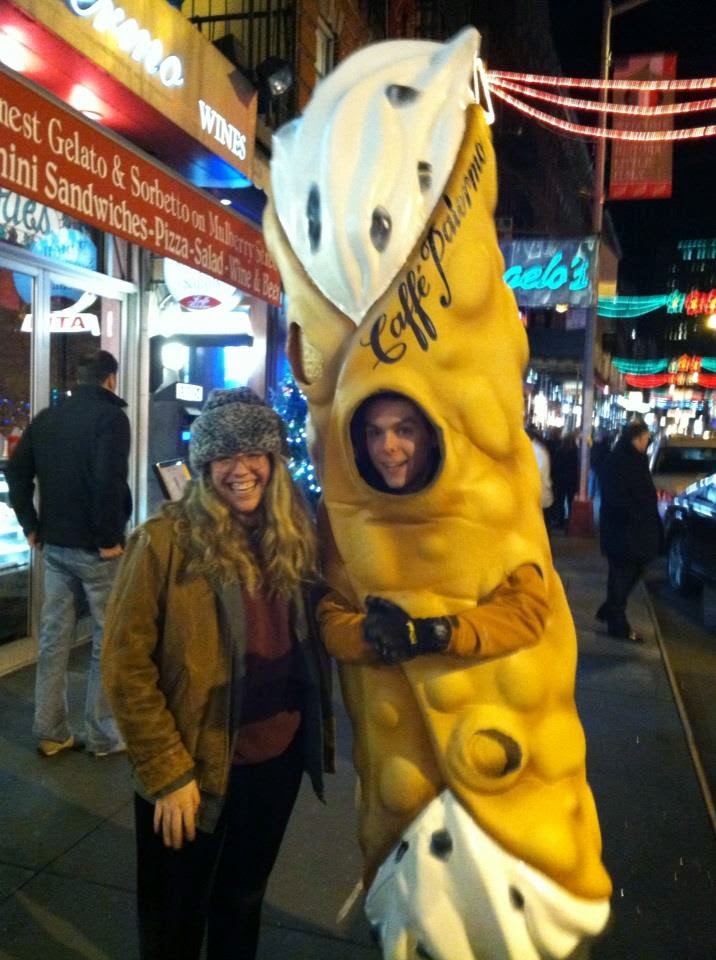 Some months ago in the chill of winter, my wife, younger daughter and I were walking through the crowded streets of what's left of Little Italy. (Little Italy is being squeezed out of existence. Asians are encroaching from the south, hipsters from the north.)

Outside one of the many restaurants that still thrive on Mulberry Street, a young man dressed as a cannoli was handing out flyers for a restaurant and posing for pictures. My daughter stood with him, I snapped a picture and began to walk away. He hustled over to me with  his cannoli-ized hand out. "Don't forget to grease the cannoli," he said. I gave him five bucks.

This weekend a man dressed up as Spiderman who plies his trade over in Times' Square was arrested. He demanded five dollars from a photo-snapping tourist who was only willing to part with a single. The police got involved, Spiderman hit the cop and got hauled in to Midtown South. Since then, five other "characters" have gotten arrested. Preying on tourists is a popular sport though illegal.

In the photo above left you can see a cop wrestling with Spidey as well as some of the other denizens of Times' Square who pose for profit.

Certainly when Damon Runyon held court at the crossroads of the world, life amid the neon and hustle was slightly more rarefied. Men still wore suits, ties and fedoras. The seams in women's stockings were always straight, and even the girls in the chorus of the "Hot Box," protected their virtue whenever possible.

Of course if you look hard enough you can find trouble still. As Damon Runyon said, "I've come to the conclusion that all of life is 6 to 5 against."

Those aren't bad odds, really, 6 to 5. They're enough to keep trying, fighting and struggling.

Just remember as you go through your daily struggles, "punch in, punch out, keep your guard up, and most important, don't forget to grease the cannoli."
Posted by george tannenbaum at 9:24 AM