We visit Katz's with Uncle Slappy. 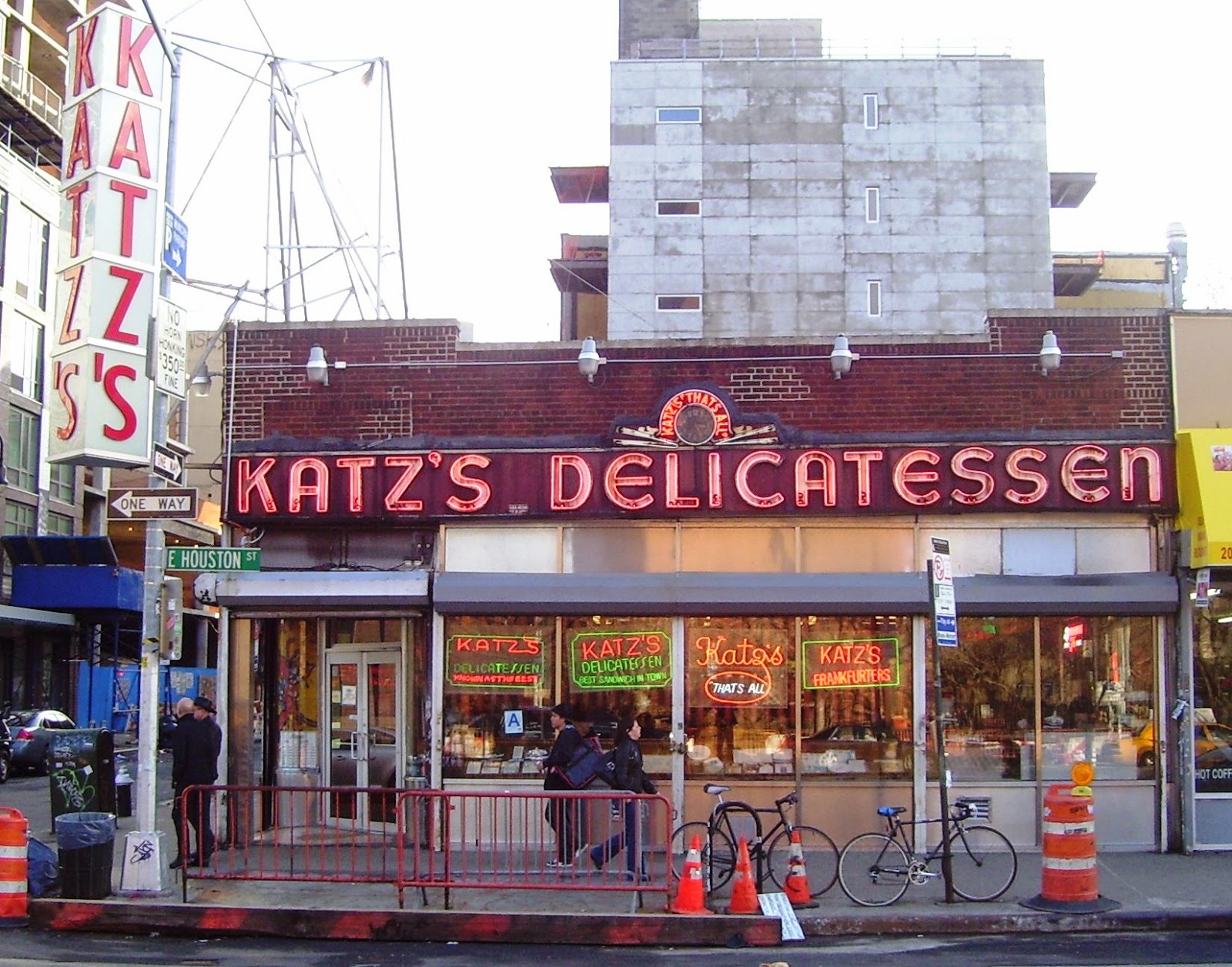 Uncle Slappy and I had one more journey to take on Saturday. It had been decided that it would be nice to have sandwiches from Katz's for dinner and Uncle Slappy, my daughter Hannah and I were to procure them.

We got into the Simca and hit the FDR. In just moments we were exiting at Houston and heading west along the never-ending construction of the broad street. I took a quick right through the traffic barricades onto Avenue A, then a quick left onto 2nd Street. Almost magically, it must be the luck of having both Hannah and Uncle Slappy with me, I pulled into a spot mid-block. No meter, no restrictions, no small feat.

I love Katz's. It is the last, pretty much of the old-timey deli/restaurants, and the best as well. It's mayhem inside, organized chaos, and with shoving, and pushing and jockeying for position in front of one of the sandwich makers--middle-aged Puerto Rican men with huge tattooed Popeye forearms from slicing slabs of meat by hand and their dark hair in snoods to keep it from the meat.

Uncle Slappy and I made our way to a sandwich man, while Hannah--who knows her way around Katz's (I taught her well) got Dr. Brown's sodas and Katz's really superior french fries.

Uncle Slappy was called upon.

"I'll have the Jewish Trifecta," he said to the sandwich man.

"and brisket," the sandwich man finished. "Three sandwiches, all on rye, with mustard."

The sandwich man obliged and began hewing the meat like Paul Bunyan felling an oak. With each different meat, he handed over a small plate with a sample. Uncle Slappy who loves my daughters with a love that surpasses all love, shuffled over to Hannah with each plate as it appeared. She had a taste of pastrami. Then corned beef. Then a schtickle of brisket. 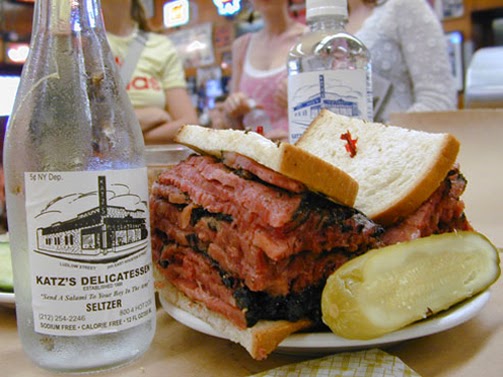 I had put a $5 tip in the one-quart plastic soup container. That assured us good samples. And when Uncle Slappy asked for sour pickles and a handful of sauerkraut, the sandwich man obliged with the generosity of a brined Santa Claus.

We handed over our Rosetta Stone of a ticket, and the sandwich guy scribbled some Cuneiform runes. I slid the ticket into my pocket, we reunited with Hannah and headed toward the register, $83.75. We thought for a minute about buying a scented Katz's candle that smells like an egg-cream, but that was $24 we needn't spend.

From Katz's, 205 E. Houston, we walked to Yonah Schimmel's knishery, 137 E. Houston, more to see the old place than to fill up. But to be on the safe side, and to trickle down some money, we bought a container of kasha varniskas and a kasha knish. 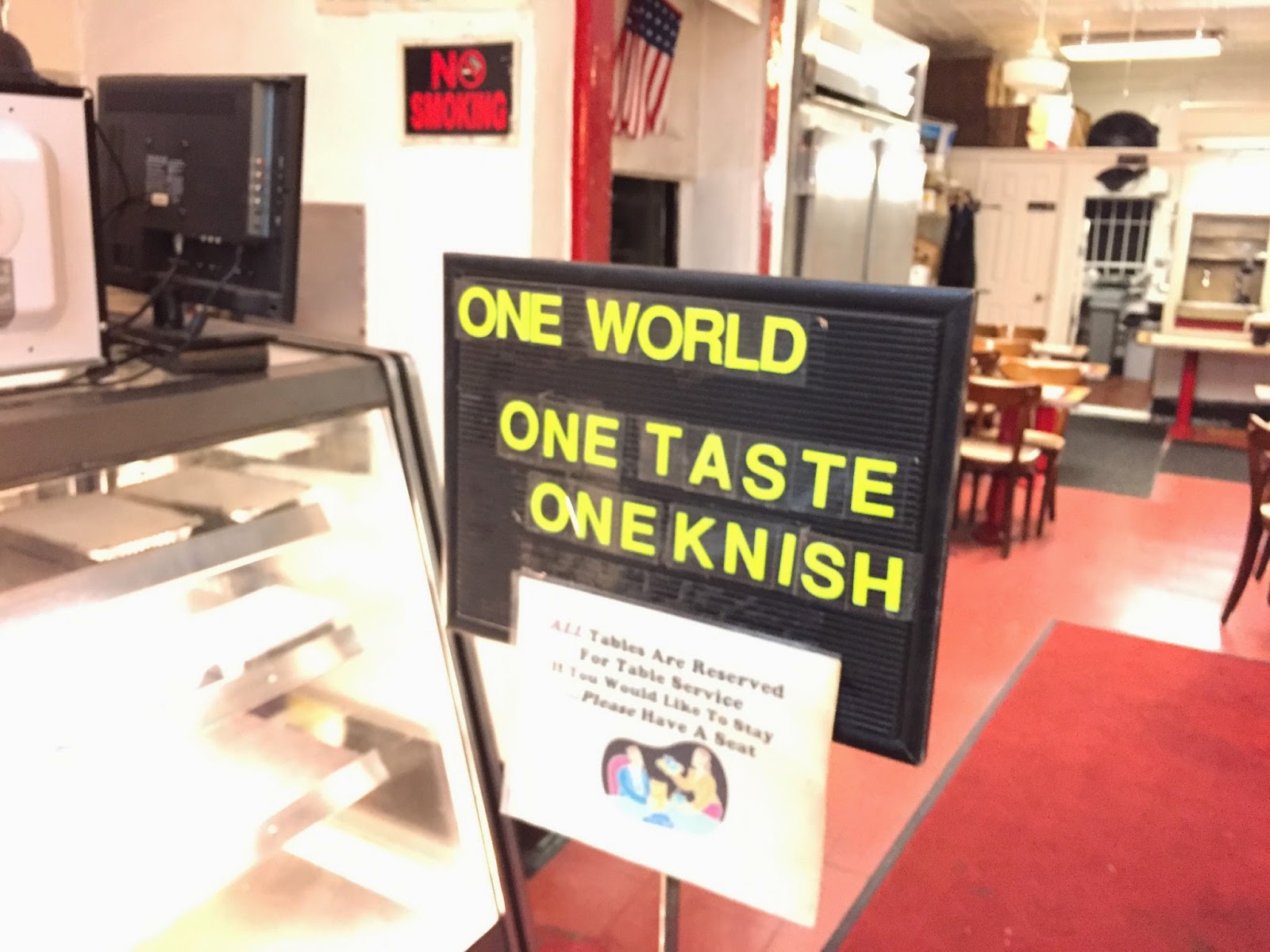 We then walked the three blocks back to the car and headed home, getting the timing just right of the lights on First Avenue. Round trip took us slightly less than an hour.

My wife and Aunt Sylvie had set the dining room table with the good china. It made for a rather incongruous pairing, the Katz's and the Wedgewood. But all of us understood the conceit.

This was, after all, a special meal.


Posted by george tannenbaum at 12:01 PM