"Fraud!" cried the maddened thousands, and the echo answered: "Fraud!"

One time, not long ago, I produced for a vaunted client a large series of banner ads. I dutifully sat through numerous media meetings where the ticket-takers jabbered on about how targeted our buy was going to be. They would reach people 45+ with a household income of $150K+.

About three minutes later, a work colleague called me. He had noticed one of my ads on a site called something like "Bug Frenzy." I think it featured cockroach races or something similarly rarefied.

Today, the major news in the ad industry is a report that says Kraft--one of online's top 100 advertisers--is rejecting between 75% and 85% of digital ad impressions due to quality concerns. You can read Ad Age's report here.

If you're too too to read the article, this graphic tells you much of what you need to know. 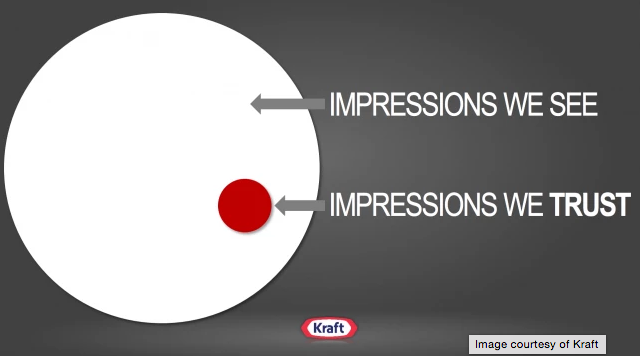 Over-blown-ness has been a part of the online world since the first binary biped uttered the first proclamation of "This will change everything."

The online ad industry is a bit like the vast strip of auto-repair bodegas out in College Point, Queens. Each shop will rip you off in different ways. Not only will they not fix your car, they'll take what is working from you.

I happen to have the soul of an historian.

Perhaps regulation in America reached its pinnacle during the Johnson or Nixon administrations. Certainly since Reagan, regulatory power has been decimated. My two cents say it's why everything sucks.

It's why you can't make sense of your phone bill. It's why air travel blows. It's why people like the Koch brothers and Rupert Murdoch have more votes than you.

Left to its own devices, it's a sham.

Posted by george tannenbaum at 11:48 AM