When the history of our era is written, say in 20 years or so (if people can still write) I believe in the parlance of Hollywood, it will be called "Gilded Age 2: The Return of the Malefactors."

The CEO of the industry's fifth holding company, Miles Nadal, saw the stock of MDC--his 'gig'-- plummet by 27% yesterday and Nadal was ordered to reimburse the company $8.6 million for expenses. MDC has, to date, incurred $5.8 million in legal fees relating to an on-going Securities and Exchange Commission (SEC) inquiry into the finances of the holding company. 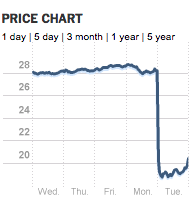 Mind you. When Franklin Roosevelt established the SEC during the Depression, he put Joe Kennedy in charge. FDR said at that time "it takes a thief to catch a thief."

It remains to be seen, of course, if Nadal is guilty of anything. If he is a thief.

And I've never worked for MDC or any of its agencies, like Crispin, Kirshenbaum and 72 and Sunny. I'd imagine things under its aegis are pretty standard for the industry. And salaries are in retrograde while raises are sparse and bonuses a thing of the past.

If you know otherwise, I'd love to hear.

Elsewhere, it's damn hard to get a $17 taxi-receipt reimbursed.
--

Posted by george tannenbaum at 8:36 AM