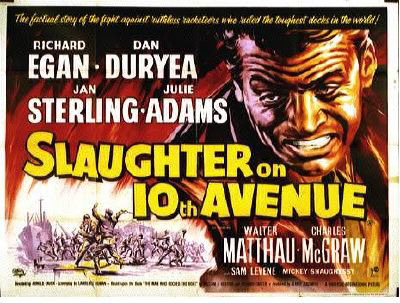 I went to a little deli on Tenth Avenue and 45th this morning, a couple of blocks from my office. It's a cruddy little place with a water-stained undulating ceiling but I like it anyway. There's no pretense here. Just a place to pick up a couple of bottles of seltzer and coffee from an urn the size of a suitcase nuclear bomb.

The place was empty when I walked in. A couple of guys sitting on plastic milk-crates restocking the soda refrigerators in the back, one crooked-cigarette manning the grill and the counter man, a medium-sized middle-aged Puerto Rican who was born, like Scaramouche, with the gift of laughter and a sense that the world was mad.

Scaramouche immediately picked out a banana for her from the pile on the worn linoleum. He held it up to his ear like a phone.

We watched her, carefully, as she sashayed out.

Before I knew it, about six or nine dark men walked in in their construction clothes. They were picking up their various breakfasts, shouting orders and getting their joe. Commotion.

A short Puerto Rican got ready to pay. He was staring into his phone, had headphones on and was playing a video game.

"I owe you from yesterday," said the gamer.

The gamer made a back hand motion with his strong right hand as if, across the counter, to slap Scaramouche.

"I get the same thing everyday."

The gamer peeved but funny said, "Anyone have a dog collar so I can walk this mutt outside."

They exchanged toast and coffee for a five and a one.

Scaramouche was shoveling sugar into a coffee cup now, his back to the gamer.

I paid and left.

It was already a good day.
Posted by george tannenbaum at 8:29 AM