With our so-called president claiming he's being lynched by a partisan democratic impeachment process, I thought it might make sense to talk about an actual lynching and its almost 65-year aftermath.

This president, who's spent a lifetime falsely accusing people of crimes they didn't commit (see the Central Park 5) or libeling the birthplace of legitimate Americans because they happen to look different (see birtherism) I have no sympathy for. In fact, this president and his inane comments about lynching are not even worth considering. His understanding of criminality is simple. Something is only criminal if it happens to him and he doesn't like it. What he does to others is legal. What others do to him is a lynching.

Let me switch gears to a real lynching. Let's talk about Emmett Till, the 14-year-old from Chicago who was lynched in Mississippi in 1955, just two years before I was born. Long before black citizens could actually vote in most of the country.

Mr. Till had purportedly whistled at a white female clerk in a small grocery store. Or touched her hand when getting change.

For that he was beaten to death, shot, mutilated and thrown into the muddy Tallahatchie River. The all-white jury found the murderers of Till not guilty. The sheriff at the trial welcomed  black spectators into the courthouse (which was segregated) with the cheery words, "Hello, Niggers."

The actual events of the lynching you should read about. A good book is "The Blood of Emmett Till." You can buy it here. It'll take you less time to read than a summer-drive to the Hamptons. I wish our purported president would read it. Before he misused words like lynching.

There's an aftermath to the Till murder. It took until 2008 for the state of Mississippi to erect a memorial sign at the spot where two boys fishing pulled Till's swollen body from the river. 53 years before a memorial was built.

The first sign was ripped from the ground and thrown into the river.

Since then, the sign has become a "selfie" location. Young racists pose in front of it brandishing powerful weapons while wrapping themselves in the racist flag of the illegal, white-supremacy-motivated confederate insurrection. 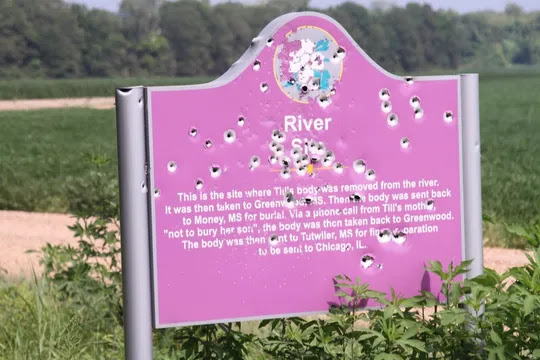 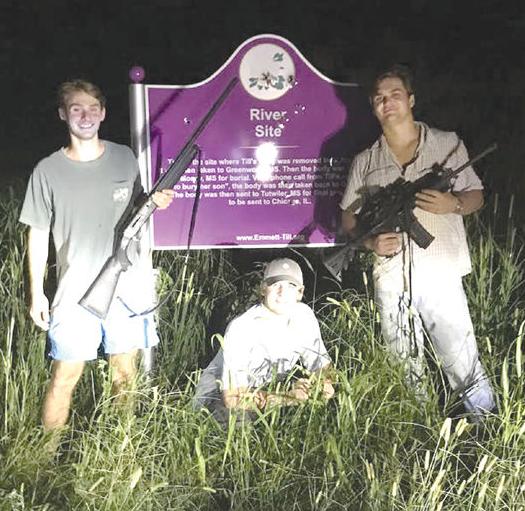 The sign has been so often riddled with bullets that it's had to be replaced at least two other times.

Sunday's "New York Times," reported that a new sign has been put in place.

According to the Times, it's "made of steel. It weighs more than 500 pounds. It’s over an inch thick, and, the manufacturer says, it’s bulletproof."

A cousin of Mr. Till's, Airicka Gordon-Taylor was at the dedication of the new sign. “Vandalism is a hate crime,” she said. “Basically my family is still being confronted with a hate crime against Emmett Till and it’s almost 65 years later.”

The Times reports, "Dave Tell, a University of Kansas professor who has written about Emmett, wrote the text that accompanies the new sign. He said it has become particularly important to tell Emmett’s story in full through 2019.

“The story of Emmett Till can’t be confined to 1955,” he said, adding that “the bullet holes are important, too.”

The new sign was made by Lite Brite Neon, which has locations in Brooklyn and Kingston, N.Y. The sign is made out of half an inch of AR500 steel and covered in an acrylic panel that’s three-quarters of an inch thick. AR500 is a hardened steel that is commonly used for targets, armored applications, truck plows and in mining. It is tempered and designed to be abrasion resistant. It is considered ideal for high wear applications, like memorials to slain teenagers. According to the memorial's website, “The sign is designed to withstand a rifle round without damage.”

The next time you hear the aberration who is our president, or a serial sexual predator or two on our "Supreme" Court say they've been lynched, you should be outraged.

It's a disgusting and fascist misuse of language.

We should all be outraged by people with no decency. Or even humanity.