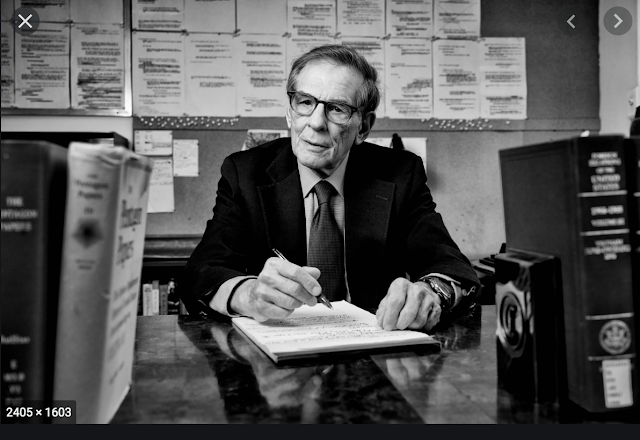 Probably my favorite writer writing today is two-time Pulitzer winner and winner of the National Book Award, Robert Caro. About a year ago Caro came out with a book about his famously prodigious writing process. It was called “Working” and you can buy it here.  It will take you about six hours to read and you will be richer for it.

At the time Caro's book came out, he also went on a speaking tour of New York. I saw him at the New York Public Library, a Times Talk and at The New Yorker Festival. In Working and at each of those three talks Caro told the same story about a creative writing class he took while he was an undergraduate at Princeton University, graduating in 1957.

When asked why he still wrote drafts longhand in pencil on yellow legal pads, Caro explained, “It's because of something that was said to me at Princeton by a professor, a very courtly gentleman, Southern gentleman, who was my creative writing teacher.

“At our last session, he hands back my short story ... and he compliments me, and as I'm getting up to go he says, ‘But you know, Mr. Caro, you will never achieve what you want to achieve unless you stop thinking with your fingers.’

For Caro that conversation became more than a rebuke. It led to Caro’s simple, but important, belief: “Time equals truth.”

Of all the evils visited upon our industry, the removal of time has been the most grievous. I don’t mean staying in an airless conference room till 2AM for months at a time. The time I mean is deeper.

It’s time to visit a client’s factory. It’s time to get to know the client’s employees—not just the C-level. It’s time to ride with five sales-people or ten. It’s spending time unattended in the corporate cafeteria. It’s time to talk to engineers and customers and retirees.

That’s essentially how you find a spouse or a life-long friend. You really get to know them. You meet their families. You break bread.

There are no shortcuts to learning a person, a culture, a language or an ethos. There’s no magic app that makes it happen. Or some powerpoint ‘deep dive.’ Or six hours of focus groups edited down to one eight-minute video or half-a-dozen man-on-the-street cameos.

That’s no way to get to know a client.

And if you don’t get to know a client and their business, you wind up—in the two-hours you have between the initial brief and the first tissue session—you wind up with cliches, jargon and more and more pixels of advertising pablum. You know, crap. Insipid. Interchangeable. And meaningless.

But to agencies and clients time equals out-of-scope.

So, time is not allowed.

Because the truth, while effective, is expensive.

So as an industry, we produce shit.

I could show a dozen examples here. Including examples from things I've done. But all that would only get me in trouble. So, next time you're "consuming media," you decide.