I often get notes or phone calls or a digital tap on the shoulder from people asking me about advertising and how to reach people in this era of short-attention spans and variegated media channels.
Most people, I think wrongly, assume that all peoples, since the beginning of time, didn't feel overly busy with way too many ways to message others. I'd imagine that neanderthals in Lascaux fretted about not being able to keep up with cave paintings, much less still have time to make stone axes and other hand tools. And fuck me, those Mammoths aren't going to catch, kill and skin themselves.
It is a human verity that every generation thinks that theirs is the busiest ever, has the least ability to focus, the most distractions and the greatest number of existential threats. Our generation is not different, just maybe a bit out in the open about things. After all, there are dust-bunnies with 20,000 Twitter followers.
All that being said, how do we reach people when we're more time-pressed than ever before and have more distractions, too, at least according to us?
I for one, have a simple solution. I go back to the Greeks. To Homer and the myth-makers (not an early rock and roll band.) And I read their stories.
Anyone who thinks these stories are boring, or convoluted, or esoteric, or not relevant today because they are three-thousand or five-thousand years old, hasn't tried them. And what you're missing out on by not trying them are stories and story-telling (real story telling, not some AI-derived copy about Saran Wrap) that is so ancient and elemental as to be the stuff of morals, adventure and our very DNA.
It never ceases to amaze me the vast amount of Britney-bullshit we consume, or Ellen DeGeneres jabberwocky or we argue over Jeopardy! hosts, when we are living in the golden age of great contemporary authors looking to the ancient writings to find the archeological core of what it means to be human.
Many of these authors, of late, seem to be women. They've taken up the important task of telling the old tales from a woman's point of view--a way they hadn't been told before. This shift in perspective brings a freshness and a vivacity to the old tales.
From Penelope, angry at the wayward Odysseus, and chastising him in her never-sent letters. From Briseis, enslaved first by Achilles and then stolen by Agamemnon, to be his sex-slave. By Clytemnestra, whose daughter Iphegenia was killed by the same Agamemnon to placate the gods and get a favorable wind so he and his armies could steal Helen back from Paris who stole her from Menelaus.
There are stories of gods, like Circe, and her freeing of Prometheus--and disdaining Zeus. I am no scholar--I don't have a curriculum. I read the book reviews of the Times and the Wall Street Journal and they give me so many suggestions I feel like a starving man at an over-the-top Roslyn Bar Mitzvah--do a want the latke appetizer with apple sauce or the pigs in a blanket?
Like my Bar Mitzvah hors d' oeuvres metaphor, my reading is peripatetic and disorderly. It's rummaging through an old attic and happening upon strange things. I don't have the rapid recall I had in decades past, but at the age of 177, not much gets by me.
Like I said, there's a lot to read and all of it, I believe will make you a better writer. Or if you have children at home who you still read to, a better parent. 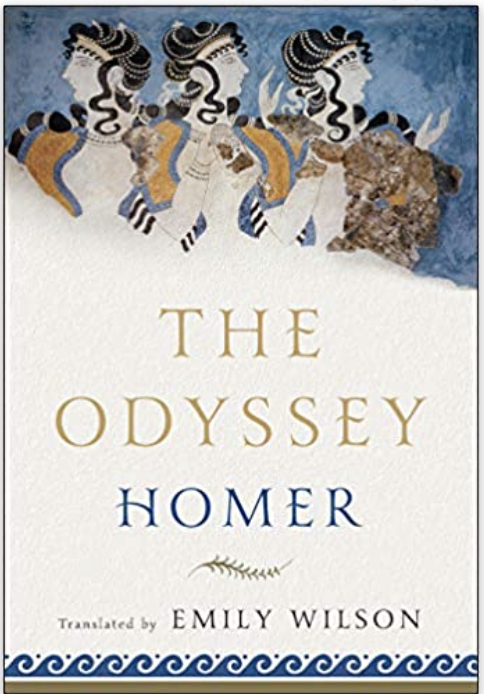 You can start here, with Emily Wilson. The first woman to translate the Odyssey in 2000 years. Her retelling is a reteaching. And she marks down a line from Athena to Odysseus that to my eyes and brain is one of the great ones in all of Western literature. If you send me a note and ask nicely,
I scribble it out and send it to you.

You can dive off the deep end with virtually anything by the great Natalie Haynes. Haynes is classical literature's equivalent of Colleen DeCourcey, Susan Hoffman, Shelly Lazarus or Nancy Reyes. Combined. She's wise, prolific and as funny as anyone's who's ever put keyboard to digital paper.

If you want to start primordially, Stephen Fry, the classical raconteur, has a trilogy out now that will send you back and forward in time at the same time. You can start with Mythos, as I did, there you'll find stories of Ouranus' gonads, the Titans, eating your children and more. After you recover, move onto Heroes and end up burned to a KFC crisp 'neath the topless towers of Ilium, in Troy.
Here's a bit from the Wall Street Journal's book review on "Troy." It make me feel like I'm less of a 'vox clamantis in deserto,' less of a voice crying in the wilderness. (Who at times doesn't feel lonely that way?)
"Myths provide a key to understanding human nature and the greatest civilizations. In “Troy” Mr. Fry writes lyrically: “It is the intriguing distance, the blend of history, mystery, and myth, the interplay of the particular and the universal that makes the Homeric experience so rich and compelling. The action is played out on the golden horizon between reality and legend, the beguiling penumbra where fable and fact coexist. It is this that endows Homeric epic with the minute, realistic and vivid detailing that so animates and convinces, yet also gives us the glorious symbolism and dreamlike depth that only myth allows, with its divine interventions, supernatural episodes, and superhuman heroes.”
You might want to read that passage again. You'll seldom read a more radiant review of a more important work. Of course, if the same review were written by Bill Bernbach, he might have just said that Homer breathes life into “simple, timeless, human truths.” And that would be just as well.
Why am I blathering on about all this?
Why?
Because I'm too busy.
Because five to eight clients are calling me a week to help them tell their brand stories. They come to me because there's no one else who knows about myth-making and origin stories and the power of human heritage.
It doesn't matter what your advertising job. Or if you work for a big agency, for a client, or for a catalog house.
You will be a better writer if you step away from Cannes.
You will be a better writer if you close the awards annuals.
You will be a better writer if you stop looking only at the new.
You will be a better writer if you examine foundations.
You will learn all the things that aren't taught anymore. About structure. And form. And impact. Not to mention the spiders' webs of human emotions--like hatred, jealousy, love and spite.
These are the ingredients of the stew that makes not just a creative person, but a person.
Two hours a week for a year and you might be qualified to teach at Yale.
Or at least become an ACD and get a $15K raise.
In any event, you and your writing, will become richer.
You owe me for that.
--
And for this, a poem by Ernest Dowson, who also seems to understand the value of myth.

They Are Not Long

They are not long, the weeping and the laughter,
Love and desire and hate;
I think they have no portion in us after
We pass the gate.

They are not long, the days of wine and roses,
Out of a misty dream
Our path emerges for a while, then closes
Within a dream.
*Life is short. Get off your ass.
(That's Horace. Unliterally translated by me.)
Posted by george tannenbaum at 6:54 AM