A reflection on age.

My internist of 40 years, Richard P. Cohen, not Richard T. Cohen, who's a podiatrist, has a few catch-phrases. If he had gone the way of the cloth instead of the way of medicine, he could build a dozen or twenty sermons around this one particular sentence.

If you're too young to understand it, just wait. You will.

I was an athlete for many years. First a ballplayer. Then a middling distance runner, despite my prodigious girth--which was, at the time, less prodigious. I did a hundred 10Ks--a 38-minute time was my best, and a dozen marathons, my best at roughly a 7:15 pace for 26.2 miles, which gave me a 3:10.10 time. That was just about an hour off the "two-pounds of weight for every-inch-of-height leaders." I clock the scales at 50 percent more than that.

For the last eight years or so, I've been taking Whiskey, my perfect golden retriever to the beach so she can do what hundreds of generations of golden retrievers were bred to do: swim and retrieve.

Now that she is nine-and-a-half, battling cancer and no longer as spry as she once was, my littoral sessions are shorter than they used to be. We'll walk half-a-mile to a seaside where people tolerate dogs, and I'll throw apple quarters into the sea. When we're done appling, I'll throw her toy duck, which to Whiskey is a real duck. 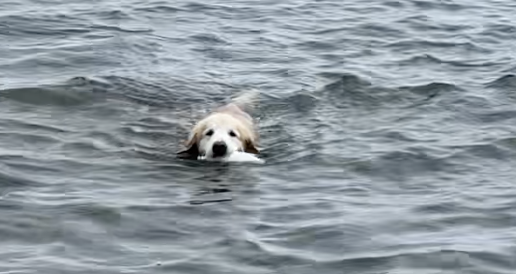 Nonetheless, I hurl whatever I hurl some distance into the chop and off she gallops, like a stockbroker after a sucker.

When Whiskey's tired, she looks at me with her limpid eyes. I've thrown her duck but she wants a marker so she can more easily find it. Usually, I find a small stone, the rounder the better, and toss it as close as I can to her duck. This identifies it for her and motivates her. Off she goes to go get that obscure object of her desire.

Yesterday, Whiskey, my wife and I went to the seaside for a fetch session just before sunset. Though it was blustery, Whiskey jumped the waves and did her thing. I threw apples and ducks and marking stones, and did my thing as well.

There was a middle-aged couple sitting on a seawall by the sea. They were drinking beer, something esoteric of course, and eating cheese and crackers. They were taking Whiskey's actions in as programming, and, I guarantee you, programming more entertaining than anything on any of the 49,000 cable channels that are forced down your throat by monopolistic service providers who provide no service.

We walked up the hill from the beach to walk home. The sea-wall woman turned to me and yelled, "did you used to play ball?" I waved her off from afar--a backhand--like a pitcher indicating to his warm-up catcher that a curve was on its way. I said nothing.

"You threw that duck a mile," she said. And then her husband added, "And you hit it with a rock every time. That was incredible."

I woke up this morning as I do nearly every morning with fairly nasty pain in my torn rotator right shoulder and pain in my equally painful arthritic left shoulder. My left foot is wracked with the crushing pain of plantar fasciitis--sometimes the pain shoots up my leg. In all three cases, I am too stubborn to do anything to combat the hurt.

But somehow I'm thinking less about my sundry pains and thinking more about that question, "did you used to play ball" and "you hit it with a rock every time. That was incredible." With those comments, to an athlete who didn't die young, the pain seemed to dissipate.