When people ask me, and they do, how I manage to write something in Ad Aged five-days-a-week for roughly fifteen years, I usually invoke the availability heuristic, though I seldom use that term because people a) wouldn't understand it and b) wouldn't bother to look it up.

Basically, the heuristic is simple. If you go to the Lower East Side looking for bed linens, you'll see bed linens in every storefront. If someone says, "did you see any tablecloths," you might reply, "not a one." Next time you're down on Orchard Street, however, shopping for tablecloths, that's all you'll see. And you won't see a single shop selling bed linens.

Writing a blog is good for your brain--and your writing acumen. You have to always be on the lookout for ideas. You have to walk through your life attuned to your surroundings. You never know when something interesting will strike--so you have to be ready all the time.

Back in the days of library research and card catalogs, when I was an aspiring young scholar at Columbia University, most of the sparks that lit the tinder of my brain came to me when I was looking for something else. Rabbit holes are good to run down and not just for rabbits. Especially if you are ideaphrenogenic--that is open to putting thoughts together that maybe haven't been put together before.

I'm convinced that the most-successful creative people are the people who walk around with their heads up. Or they're like a commercial fishing boat dragging a mile-wide net along the bottom of the sea. They are always in the hunt for something. They're always looking to catch something, even if that something has no immediate use.

My ex-partner, Sid, for instance has a Pinterest archive with more ideas per square pixel than almost anyplace in cyber-Earth. People in the idea business should be hoarders of ideas. They should stuff their coffers up to the rafters with them. Never knowing when they'll come in handy. But they will. 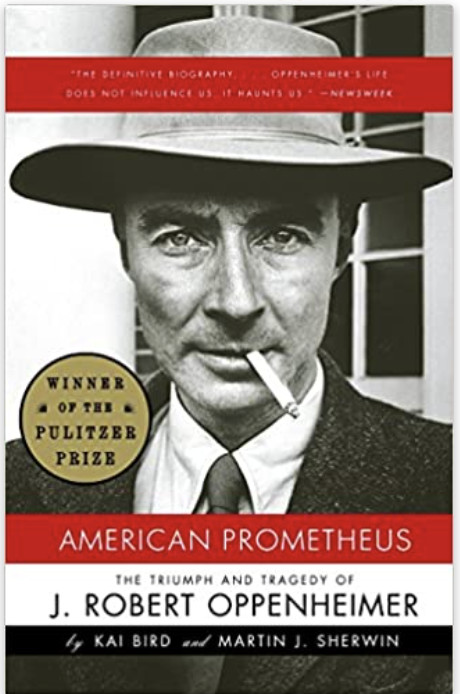 Early Sunday morning, I read an obituary in The Washington Post of an author I liked, Martin J. Sherwin. Sherwin, along with author Kai Bird, won a Pulitzer-prize for their biography of the Father of the Atomic bomb, Robert Oppenheimer. It was called "American Prometheus," and if you don't "get" the Titan in the title, do yourself a favor and look up who Prometheus was. If nothing else, it'll keep you awake a couple of nights and have you appreciating your in-tact liver.

There was a bit in Sherwin's obituary about Oppenheimer's favorite toast. It makes me think of the advertising industry, and perhaps explains why, today, at the age of 63, I am about 63 times as busy, profitable and productive as the next 63 agencies combined.

Oppenheimer's toast, I suppose in the great German-Jewish-Yiddish tradition of intelligent curses was elegant in its spite.

"To the confusion of our enemies."

I know more than a few CEOs who might, at this moment be reading this, who I'm sure will not only relate to the mean-ness of the toast, but will also adopt it when it comes to new business, product launches and more.

As I enter my 41st year of making my living at a keyboard, more and more my job is to throw confusion into abeyance. It's to find clarity in a sea of entropy.

Clients come to me now less for an ad or a :30--those seem like parity products in today's advertising world. The communications equivalent of parsley alongside a $44 steak. You have to put it there but no one really needs it or wants it.

But clearing up confusion, well, that's the ticket.

Going back to Prometheus, we can traipse over to another ancient Greek, Pandora. Of all the woes that escaped from her box, confusion was the woe-i-est.

In fact, if you think of either Shakespeare's Macbeth or the mis-rule of donald frump, a world full of foul is fair and fair is foul and hurly-burly and topsy-turvy and whatever that skinny blond's name was, "alternative facts," they're all just methods of propagating confusion, discord and chaos.

If you run a business or an agency and you want your next pitch or next launch to be un-confused, you might be able to get me for three days or five. In that time I'll probably figure out your company's spinal column and make things clear. So clear even a CEO could understand it.

Yes, I charge a fortune.

There's no confusion as to why.