Something the money people will never understand. 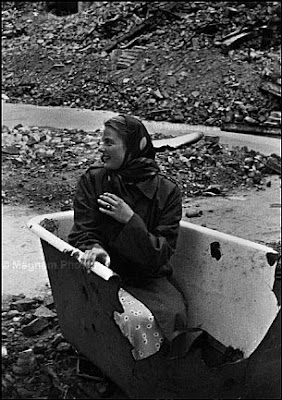 A little more than 60 years ago when Europe was war-torn and worse for wear, the great photojournalist Robert Capa and Ingrid Bergman fell in love. This photo was taken by Capa. The absurdity of a bathtub and Bergman in bombed-out Berlin.

Bergman wanted to marry Capa. But Capa knew that he would have to give up being a journalist were he to do so. He turned Ingrid down and continued traveling the world shooting wars. He died in Indo-China having stepped on a landmine at Thai Binh.

Money people will never understand creative people--people who would choose their creativity over, even, the allure of Bergman. No big point here. Just something to think about when you curse the gods.
Posted by george tannenbaum at 12:53 PM

love is forever, the object may change. creativity is forever. Or is creativity the love object...or whatever...anyway...the uncompromising drive behind the most outstanding achievers especially in the creative fields seems bigger than love...or at least what looks like love to us mortals