As time goes by. 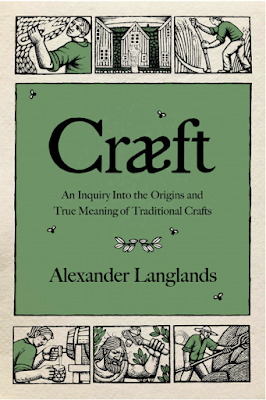 I read a book not long-ago called “Craeft” by a guy called Alexander Langlands. Craeft is the middle-English spelling of Craft, complete with diphthong.

At its heart, the book is about what’s been lost over the centuries, or millennia, when we stopped doing things by hand and turned instead to machines and specialized workers.

Langlands starts the book with a dilemma. He lives on a farm “in the middle of nowhere,” his yard is terribly over-grown with weeds and grasses, and he can’t get his weed-whacker started. He then remembers that at a garage sale some months earlier he had bought an ancient scythe. 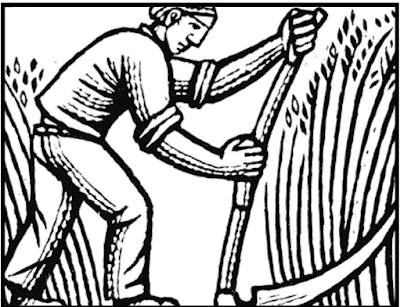 He writes, “That summer the scythe became the tool of choice. Relieved of the rigmarole of fuelling, servicing and maintaining the [weed-whacker], scything could be conducted on a whim, the scythe plucked from the toolshed and employed for an hour or two here and there. My technique improved. I became stronger and began to feel less exhausted at the end of a stint, and almost matched the time taken to do the same job with a [weed-whacker]… I realised that I’d taken a traditional way of doing something and had found that, on my terms, it was just as effective as the mechanically charged, petrol-powered methods of today.”

And that brings me to my point, which is about innovation.

In Friday’s “New York Times,” there was an article called “End the Innovation Obsession,” by David Sax. He begins with our prevailing anxiety over FOMO—fear of missing out. That something exists that is wholly good and we have to get our hands on it or our lives and our very prospect of potential fulfillment or happiness will wither.

Sax says,
“Each year businesses, institutions and individuals run around like broken toy robots, trying to figure out their strategy for the latest buzzword promising salvation.
“What’s your company’s plan to onboard wearables? How’s our Google Glass program coming? Where do you stand on Big Data? A.I.? Machine learning? How soon can we pivot to video? How many tablets should we buy? What’s your child’s school’s V.R. budget?...

“Gadgets are procured, deployed and discarded. Resources are squandered as the technology’s actual capabilities fall short of its promise…

“But at its worst, this approach to innovation can truly be destructive. Schools that hastily purchased tablets for students cut drama, music and sports programs to pay for devices with few proven benefits. Districts that adopted untested computerized voting machines have seen elections compromised. Companies that integrated artificial intelligence into the hiring process have actually reinforced gender and racial stereotypes. Publications that increased their focus on video content while slashing reporters, all in response to Facebook’s viewership numbers, later learned that these figures — the entire basis of their new business models — had been fudged....

“True innovation isn’t just some magic carnival of invention, like a Steve Jobs keynote with a pretty toy at the end. It is a continuing process of gradual improvement…. Often that actually means adopting ideas and tools that already exist … or even returning to methods that worked in the past.”

All of them, yes, every single one of them, talks about what’s new, what’s going to change everything and what’s about to die.

That people like to laugh. They don’t like to be spied on and under-surveillance. They like to be treated with respect. They respond, more often than not, to other humans, not bots, bullshit and bureaucratic bullying.

We chase, like a rabid hyena chasing its tail, the new. There are whole agencies dedicated to helping businesses adjust to paradigms that aren’t worth a dime.

There are very few that look clients in the eye (virtually impossible when 97.33% of your contact is done via a ill-functioning conference call) and say, “this is what will touch someone’s heart. This is what will inspire them and move them.”

No, we are too busy proclaiming that GenerationHuh is a “cohort” unlike any humans who came before us. Any humans who ever were. A whole new species.

I’m no good at being noble, but it doesn’t take much to see that most of what you need to know about humans you could learn from Dooley Wilson in “Casablanca.”