My old man grew up poor and fatherless in West Philadelphia. Born just before the depression--the country's, not his, he was too young to be drafted into World War II, and too cowardly to enlist but he did do service during the war--of a sort.

With most men over 18 overseas, my father went down to Philadelphia's giant central Post Office in University City and got a job sorting mail. That was a good job in 1943 and for a 16-year-old.

Like me, my father had a prodigious memory, and according to him, like a London cab-driver, he knew every street and every postal zone in what was then America's third-largest city.

Some years on, my father who had an advertising man's gift of quip, wrote a be-bop song as a follow-up to Charlie Parker's "Salt Peanuts," called "Two Peanuts." Parker took a pass on the song when my old man somehow got it to Bird's agent. But it was picked up by a local quintet called "Woody and the Termites," and before long "Two Peanuts" was a hit on local stations. All at once, my old man had more money than he ever before had in his life--$2500--roughly a year's postman's salary for an hour's work or two. 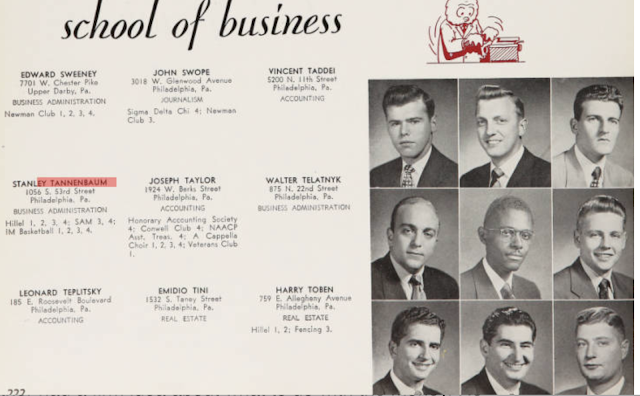 My father had a firm idea about what to do with the money. He put it all into a storefront adjacent to his mother's house at 1056 S. 53rd Street, in West Philly. He had a thesis--rare for a 23- year-old--that every neighborhood needed "the last place to go before you go home."

So, Stan opened up 'The Knight Spot,' a 24-hour sandwich joint that was to be his ticket out of what was then a Jewish ghetto.

One of the things Stan passed onto me was a fractured relationship with time. My father, for over six months, ran The Knight Spot, an all-night restaurant, all by himself. He saw no reason to ever close--even though he was the only employee, save his mother, Ida who would stop by (she spoke no English) and burn a burger for a disgruntled customer and his best friend, his cousin Herb, who would spell Stan so he could take an occasional nap in a bed, not leaning on a mop.

As GeorgeCo., LLC, a Delaware Company enters its second year in business, I notice my father's temporal eccentricities have grafted onto me. While I am very busy with the pushes, pulls, yins and yanks and more and with a growing list of growing clients, I try to go to sleep each night having nothing hanging over my head.

I don't sleep leaning on a mop, as Stan did, but my wheels seldom, if ever, stop turning.

That doesn't mean I do immediately all the work I get. It does mean that I have organized my files, cleaned up my notes and usually written a note or two to myself about what I want to write--whether they're ads, scripts, manifestos, taglines or speeches for the CEO.

I write up my conversations with clients--the big themes and the incidental anecdotes. Within them, usually lies the spark to advertising tinder.

Doing so means I've set the table or sous-ed the chef or let breathe the wine, before preparing the meal.

A lot of time that means I have what my wife calls George-Focus. It's a mania of sorts, I'll concede.

She could be clanging on her cast-iron pans with a hammer or the back of my skull, and I will scarce budge from my keyboard. Back in my Ogilvy days, when a big meeting or a pitch loomed, it wasn't unusual for me to plant myself in my cliche'd Aeron, and write until I had written fifty headlines I liked. Not just fifty headlines--fifty I liked--that I knew were good. Sometimes it seemed I had done an entire agency's work before the agency showed up for the day, you know, just before lunch.

Old Iron Ass, some called me. Usually followed by the imprecation/admiration "You're writing things faster than we can read them."

My goal in all this perseverating is something I learned the one time I sat across a pale oak table from Milton Glaser. We were working on a poster together. We started at 7:30AM and I galloped up the stairs two at a time in his brownstone with a headline already formulated.

"That's pretty good," he said when it emerged fully-formed from my noggin like Athena from Zeus' head. And then he began to doodle.

We talked a bit. And then he pushed away from the table. I took that as my signal to head to my paying job.

"Let's let it marinate a bit," he taught me. "Call me tomorrow."

No use delaying. I want to have my thoughts all thoughterized by the time I get up in the morning. I like to let things marinate while I sleep. I generally walk for two-or-three hours a day, and I like to have something for my brain to chew on while I do.

I don't listen to music or talk on the phone while I wander. I work out my assignments. I usually, when I get home, run to my Mac and type for 30 minutes. I've trained myself to remember things I think--and generally those things serve me pretty well.

My business partner and general manager said to me the other day, "It's amazing how fast you are."

I haven't tried explaining that I'm not really very fast.

I just think a lot.