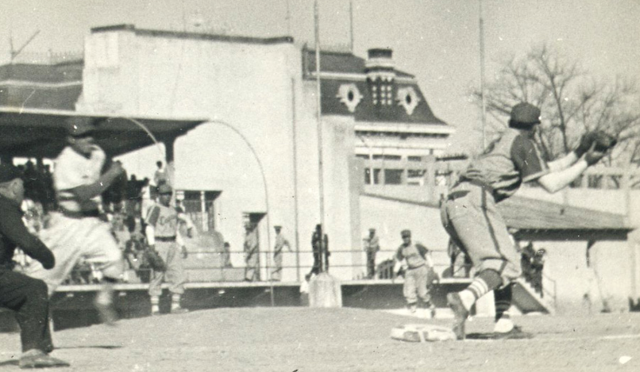 The first time I stepped into a professional baseball stadium that wasn't a major league stadium, was when I showed up one morning, unannounced, unwanted and unknown at el Estadio de Beisbol Francesco I. Madura, in Saltillo, Coahuila, Mexico.

That was more than 47 years ago. And though el Estadio was relatively new at the time (this was 1975 and estadio was built in 1963) I remember thinking to myself that the place was as rickety as set of tectonic tinker toys.

A few years earlier, back in the Bronx, a team I was playing on had won some tournament. We were invited to Yankee
Stadium--the Cathedral of the sport, and got to go down onto the field to meet some of the players. The turf was as green as a Brazilian rainforest. In el Estadio, the grass was more brown than green, and the infield dirt was stony and alluvial, like the fringe of a beach on City Island.

My first time at bat as a professional, just a few hours after trying out for the Seraperos, I caught a fastball up and out over the plate. I hit it as hard as any ball I ever hit, and it lined to left and struck the desiccated maroon wooden wall that ringed the outfield. In fact, it cracked through the fence and stuck in the dried wood. I had a ground's rule double.

I remember not much from the rest of the game but I stayed late in the locker room afterward, looking at the old pipe above my cubby and watching it drip brown water on the floor beside my space. I threw a sandpaper towel to cover the wet, but soon it was damp and yellowed like everything else.

Once dressed, avoiding going back to my small hotel room with a cardboard dresser and just two of three blades on the ceiling fan, I walked out onto the field and then climbed over a small metal railing and into the stands.

The stadium was small. Until its reconstruction in 1996 when it nearly tripled in size, it had just 6,000 seats. And as I walked around the single deck listening to the janitors sing and chatter as they cleaned the ball park, I remember thinking that of the 6,000 seats, a good 3,000 seemed to be missing an armrest or a slat or a coat of paint.

I knew no one in Saltillo at that time. I had no friends on the team. Like the slats on those so many seats, everything I had known or knew was missing or broken or both.

Even Hector, who would quickly have me move into his small neat house with his wife, Teresa and would become my de facto father--I was with him when he died--barely knew me and I barely knew him.

Maybe it was my loneliness, the fear of being all alone in a strange land where I didn't understand or speak the language, maybe that was the reason the entire city of Saltillo then--almost half-a-million people--and older by decades than any city in el Norte seemed so, not decrepit, but worse, in the late stages of falling apart.

I didn't know back then, after Nixon's resignation, after the Agent Orange defoliation of the Vietnamese jungles, after a million villages and a million people being killed, the word dystopian. I probably could have guessed its meaning but I hadn't heard or read, yet, the word.

But in rape-borne Saltillo, a city spawned by the Spaniards lust for gold and god and girl, it seemed like every facade was crumbling. The old towers built by the glory that was Spain, leaned as if we were in Pisa. Every street lamp flickered. Every stairwell was missing one step, or two. And every person and every automobile was absent either some teeth or a headlight or a taillight. Or all three.

As I fell in love in Mexico, first with being away from what I had run away from in America, next with Hector, next with Karmen, my summer's inamorata, then with the team, the boys, the game, the aches and the pains, I fell in love, too, with Saltillo and Estadio.

You don't see the things you used to see when you were not in love. You see people, homes, jobs, cars, children, restaurants, lovers, cities, countries, you see everything with love. I suppose if I saw a replica of my first car, a used 1964 Mercury Comet with 108,000 miles on it, I'd see, not a jalopy tilted on all four sides, but a bejeweled coach pulled by a team of snow-white horses and driven by a coachman who looked like Heidi Klum and smiling like a midwestern politician.

One night, in the dugout in the stadium as the long season was nearing its end, I was falling out of love. With baseball itself. With the 12-hour bus rides. With banality and bruises and beanballs. I was falling out of love with realizing that once you run away from home the place you run to soon becomes your home and maybe that too needs fleeing.

"I think the world is falling apart," I said to the dead air next to Hector. "This is a bad stadium."

Hector watched closely the game. We were down by two--it seems we spent the whole season down by two--as we headed into our last at bat. He balanced a 33-ounce bat on two fingers of his right hand. He kept the bat vertical for a good two-minutes, watching the game first, his periphery keeping the ash upright. When the bat tumbled, he started again.

"You are a young man," Hector balanced. "You had a good season. You are a good ballplayer. But now you are tired."

"I'm sorry, Hector. This is a good stadium. I love this place. You are right."

"No," Hector said. "You are right. You are only 17, but you are tired like a 70-year-old. This is a bad stadium." The bat fell again to the concrete. And Hector again balanced it as he watched the game.

"You, Jorge, deserve that tired. You were not born young. You were born almost dead and as threatened as a small nation surrounded by large enemies."

Andrade, pinch-hitting for our junk lefty, Marco Tovar, punched a bouncer through the right side. It chopped heavily on the hard ground of the infield and hopped over their second-sacker’s head. 'Brutus' Cesar came up as the tying run.

"It is a bad stadium," Hector said. "The men who built it took five dollars out of every four allotted to it to coat their pockets with gold. They opened here with no lights, no doors on the bathrooms and on the rare days it rains, puddles to your waist on the warning track."

Cesar popped up to their catcher and the game was over. The air was fully out of the balloon. The day exploded but without a bang.

"But," Hector said, "It is a bad stadium. It was named after a man who the people voted to become president of Mexico, but the despot, Porfirio Diaz, the president for life killed him with one-thousand bullets to his head.

"He killed one-million others, too. Men and women and children who died wearing the only clothing they owned, many barefoot because they had no shoes. This is who the stadium was named after.

"And it is a bad stadium. And this is a bad land. 'Pobre México, tan lejos de Dios y tan proximo a los Estados Unidos.' Poor Mexico, so far from god, so close to the United States. But is better to have a bad stadium with good people," Hector said, stopping mid-sentence and sitting with me alone in the empty dugout as the few fans left the place.

We sat in the quiet as the crowd left the bad stadium. Through thick metal doors, we heard the boys in the locker-room. "We are good people, Jorge."

Posted by george tannenbaum at 8:18 AM