25 Not So Random Things I Hate. 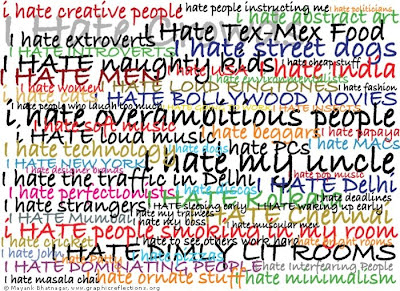 Last month it seemed that everyone on Facebook was responding to a scourge called "25 Random Things About Me," or something like that. I thought I'd write a list that makes sense to me.

1. I hate do-nothings who pontificate and judge but don't create.
2. I hate syncophants and suck-ups whose egos are inflated and portfolios are flimsy.
3. I hate poseurs who try to snow you about technology and new paradigms instead of having ideas.
4. I hate people who tell you how late they worked the night before.
5. I hate people who say things like, "we're going to own the color blue." That's like saying we're going to own the letter "s."
6. I hate when people show up late for meetings.
7. I hate bad spelling and sloppy diction.
9. I hate people who don't say please and thank you.
10. I hate people who call meetings between 12-2 and don't provide lunch.
11. I hate people who think shooting with "Mario" is an idea.
12. I hate agencies who have plenty of reasons why we can't do that.
13. I hate creative directors who hire senior people based on ads that never ran.
14. I hate award-show incest. Ads that never ran being judged by people who never built a client's business.
15. I hate closed doors.
16. I hate analysis that ignores gut.
17. I hate people who take themselves seriously.
18. I hate all those that make this so hard.
19. I hate soul-sapping cost-cutting that winds up costing more than it saves.
20. I hate 360-degree reviews.
21. I hate jargon.
22. I hate creatives who haven't read the old VW ads. That's like a film-major having never seen "Citizen Kane."
23. I hate too many words.
24. I hate stock photography.
25. Most of all, I hate bullies.
Posted by george tannenbaum at 7:14 AM

I hate when blah-blah takes the place of creative work. If you have to explain what I'm looking at, well...

I also hate people why start their sentence with "I know you're busy, but..."

I hate creatives who don't understand that "too many" words make ads persuasive, not ugly.

Anonymous, if the words make the ad persuasive, there aren't too many.

#25. I agree. And how do these borderline personality monsters rise to the top in agencies spreading their poison to all? I just never got that.