The slaughtering of loitering. 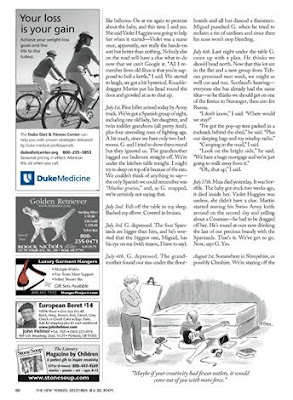 I just read an article in The New York Times about a couple of colleges who are beseeching their students to take a day off from electronic connections. You know a day away from texts, emails, facebook, IM, televisions and the myriad other ties that bind.

Right now I am working in an agency that is email crazy. If the last, say, 10 years could be called "the email era," I've managed to keep up with my emails, usually responding in no more that a couple of hours. Where I am now, I am days behind.

In short, I am so busy with so much e-superfluity that I can barely do any work.

I've written in the past about the French film-maker Jean Renoir and his famous quotation "All great civilizations have been based on loitering." I suspect the same is true of businesses and relationships.

But most everyone is too busy to think about that much less adhere to Renoir's adage.

-
BTW, the cartoon above shows a teenager surrounded by electronica. Her mother says "Maybe if your creativity had fewer outlets, it would come out of you with more force."