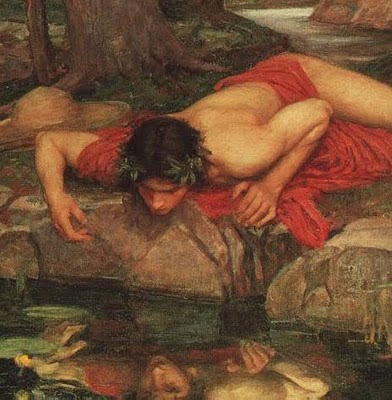 I eschew all things that plumb the depths of celebrity worship. Accordingly, except for glancing at a stray headline or two I don't know much about Mel Gibson's latest tirade. I had given up on him ten or twelve tirades ago and you'd have to pry my eyes open with toothpicks to get me to watch one of his movies.

However, David Brooks has an op-ed piece in today's "New York Times" where he talks about Gibson (the micro) and our culture of narcissism (the macro.) You can read Brooks' piece here: http://www.nytimes.com/2010/07/16/opinion/16brooks.html?hp

But let me point you to what really struck me. Brooks' cites a book by Jean M. Twenge and W. Keith Campbell called "The Narcissism Epidemic." The authors claim that since the 1970s we have been suffering from "national self-esteem inflation." How's this for data?
"In 1950, thousands of teenagers were asked if they considered themselves an “important person.” Twelve percent said yes. In the late 1980s, another few thousand were asked. This time, 80 percent of girls and 77 percent of boys said yes."

It seems plain to me that this measure of self-involvement has had huge impact on the advertising business. In the first place customers are so heavily involved in their own world that the only thing that matters about a product or service are the "conversations" they are having about it. This means they are resistant to the usual sort of Madison Avenue blandishments.

Second, narcissism has lead to changes in industry parlance. An insight used to be a rare and coveted thing. Now insights are anything anyone says. "Tall people tend to have big feet," passes for an insight today. And we all go to myriad meetings where purported insights fly like Indian arrows at Little Big Horn.

Finally, narcissism has, of course and naturally, affected client-ville. Clients believe "If it concerns us, it should concern you." And so they narcissistically show people jumping up and down and declaring their product the greatest thing, the biggest innovation, the most delicious cookie since the very beginning of time.

Not a recipe for success.
Posted by george tannenbaum at 8:39 AM

Imagine the reactions if someone presented an idea for an ad for a small car today, and the idea was to show it in a funeral procession? (One of VW's most memorable ad, by DDB, for those who may not have seen it.)