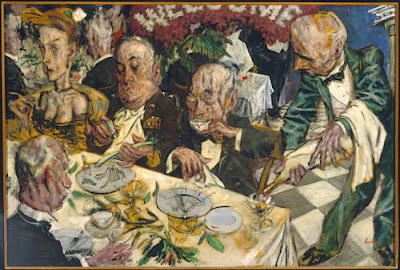 Yesterday I read an obituary in "The New York Times" that made me think of advertising. http://www.nytimes.com/2010/11/10/arts/10levine.html?scp=1&sq=jack%20levine&st=cse The obituary was of an artist I never heard of, though probably should have, named Jack Levine.

Levine was "an unrepentant and much-admired realist artist who skewered plutocrats, crooked politicians and human folly...He specialized in satiric tableaus and sharp social commentary directed at big business, political corruption, militarism and racism, with something left over for the comic spectacle of the human race on parade."

Speaking of advertising, or as it should perhaps be more appropriately called "fadvertising," Levine railed against "abstract painters," calling them space cadets. His iconoclastic stance relegated him to the fringes of the art world.

“I am alienated from all of these movements,” Mr. Levine said. “They offer me nothing. I think of myself as a dramatist. I look for a dramatic situation, which may or may not reflect some current political social response.”

According to "The Times," "the onward march of abstraction and avant-gardism relegated him to the margins."

In Levine's own words, “I made quite a splash in the art world in the 1930s, and it seems to me that every year since I have become less and less well known."
Posted by george tannenbaum at 9:36 AM

Art speculators will soon take advantage of his lack of fame, now when he's dead. Aside from the point you're making in regards to what's considered hip in advertising today. Selling doesn't seem to be it.

I miss him already and I'm a space cadet.