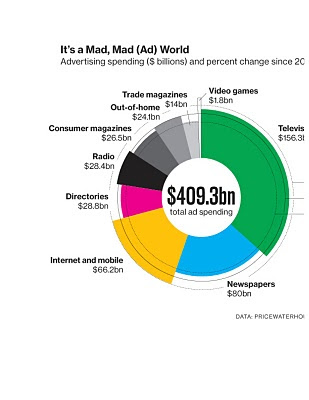 Well, together, those "dead" media account for more ad spending--$135 billion, to internet and mobile's $66.2 billion.

TV, the deadest of all media, has 250% of the ad sales of the internet and mobile.
$156 billion was spent last year.

Listen, my point here is simple.

The bombast of the death-knell ringers should not over-shadow the facts.

The proper way to reach consumers is through a variety of different channels.

A new model won't do it.

Spurious claims of "engagement" won't do it.

Hard work.
Posted by george tannenbaum at 10:54 AM

The media channels are still in place but their influence is shifting..dramatically. How that content is viewed and acted on is changing. The audience is changing. If you disagree with all this why do you work at a digital agency.

I work at an agency. An agency that specializes in digital. But one that is committed to doing whatever it takes to motivate behavior. That takes a complex mix of media. I don't think of myself as "digital," "analogue" or "left-handed." I am in the communications business and capable of using whatever channels work best for a given challenge.

BTW, Anony, let's have a cuppa coffee and we can hug this out.

would love to see the right edge of the chart