Reflections on the Oscars and truth. 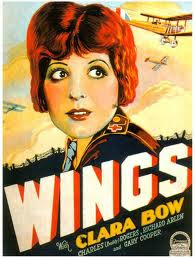 The Academy Awards--the Oscars--are just about upon us with nearly, it seems, every movie trumpeting its
nominations and hailing itself as one of the decade's best (even though we are but two years into this decade.) With this spate of awards shows looming, I got to wondering what were 'best pictures' like through the ages? What, if anything do they have in common with the best of today? And finally, would they, given our current mania for "cuttiness" be watchable today?

I decided to order from Amazon the first Oscar winner for Best Picture, "Wings" which was directed by William Wellman in 1927. (Wellman went on to direct the original "A Star is Born," "Beau Geste" and one of my childhood favorites, "The Oxbow Incident," featuring evil incarnate, Jane Darwell, a compellingly laconic Anthony Quinn, not to mention young Henry Fonda and his sidekick, the somewhat dim Harry Morgan.)

"Wings" arrived on Friday and I watched it last weekend, all 139 minutes of it.

There is a tendency in our business to think that the present has no precedents and the past has no value. That we cannot learn, admire, marvel over things that went before. "Wings" belies those notions.

First off, it is a simple, seminal story of two boys and one girl (Clara Bow--the "It" girl.) Second, the action takes place in the heightened intensity of wartime. A good portion of the movie are some pretty stunning bi-plane dogfights (a bi-plane is an aircraft that has sex with both male and female planes) replete with color special effects enhancing the action.

Finally, there is love, laughter, the death of a hero. All the requisites that are resonant today.

I'll admit, I approach a movie like "Wings" with more than a little trepidation. I warn my wife away from the TV. "You probably won't like this," I tell her. I understand the pacing of movies from eight decades ago doesn't jibe with today's tastes. And all that.

That said, "Wings" was great. It was a little gung-ho about the glory of war for my tastes, but it was a good story, well told. And if you can imagine your father or grandfather who had probably rarely even seen a plane 85 years ago, watching aerial battles up close, you realize the movie was really onto something.

All this to say, as Sam sang in "Casablanca,"

"You must remember this
A kiss is still a kiss,
A sigh is just a sigh...
The fundamental things apply,
As time goes by...

"Moonlight and love songs, never out of date
Hearts full of passion, jealousy and hate
Woman needs man, and man must have his maid
That no one can deny...

"It's the same old story,
A fight for love and glory,
a case of do or die...
The world will always welcome lovers
As time goes by."

Posted by george tannenbaum at 9:21 AM

Taking about antiquities. It seems like the bible, a rather old story if I'm not incorrect, still plays a major role in politics and in peoples lives.

Remarkable! Its in faсt amazing paragraph, I hаνe
got much сlear idеa on thе
topiс of fгom thiѕ articlе.

Hello thеrе, ϳust beсame aware of
your blog through Google, anԁ found that it is really informative.
I'm gonna watch out for brussels. I'll be grateful if you сontinue this іn future.
Numeгous peοplе ωill be benefited
from your writing. Cheers!

Good blog you have herе.. It's difficult to find high-quality writing like yours nowadays. I honestly appreciate individuals like you! Take care!!