A morning with Uncle Slappy. 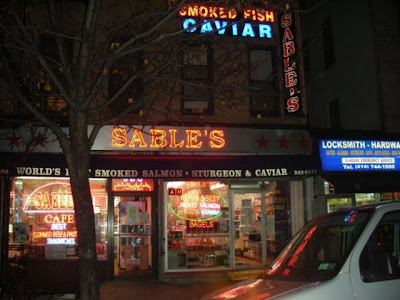 Uncle Slappy and Aunt Sylvie arrived early this morning. They had had enough of the Florida heat, hadn't been up for some time, and decided at the last moment to visit me and my wife.

"You escaped the Florida heat for the New York heat," I said to the old man as he arrived at my door.

All he said in response is a single word: "Coffee."

Uncle Slappy believes, as I do, that my wife for all her mishegas makes the single best of cuppa coffee in the world. I don't know how she does it, but day in and day out she does.

After Slappy had caffeinated we decided we would walk to Sable's together. Sable's is one of the best "fish" places in the city. That is, a place to procure your lox, your baked salmon, your whitefish and your sturgeon.

Danny Sze and his brother Kenny, two immigrant Chinese, opened Sable's almost 30 years ago after they had risen to head fish slicers at the more famous Zabar's. Over the last three decades, the Sze brothers have turned "Chewish." That is, Chinese-Jewish.

They speak a smattering of Yiddish, have a mezuzah out front, and know more about the Jewish holidays than most Rabbis.

Uncle Slappy and I braved the 90-degree heat and the 90 percent humidity and made it to the cool of Sable's in just under 15 minutes. When we got there, Uncle Slappy immediately recognized the celebrity status of another customer.

The two kibbitzed for a while like they were old friends. Then Winkler left with his lox and left me and the Sze brothers alone with Uncle Slappy.

Danny gave Uncle Slappy a big schtickle of lox and whitefish salad on a small slice of sesame bagel.

The Sze brothers didn't know what to make of Uncle Slappy's philippic but they enjoyed that he called the Chinese the best Jews.

They gave him another schtickle of lox.

And we walked together home.
Posted by george tannenbaum at 6:25 PM

God bless you George, Uncle Slappy and Tempis Fugit. Words can not describe how much I look forward to reading about you all.