The 4th on the water.

My kids have been in for the last couple days, Hannah from all points of the globe (most recently New Zealand) and Sarah with her boyfriend in tow, in from Boston.

My wife got tickets that gained us entrance to Pier 66A, which juts out into the muddy, turbid Hudson from just about 26th Street. The pier itself is on two levels, and because we paid at a higher rate, we were allowed to go topside. 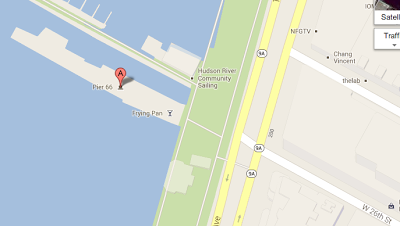 We finally found a small round table near the western-most part of the pier. We were about 20 or 30 yards out into the Hudson and about 150 yards from the southernmost of the four Macy's barges from which fireworks were being launched.

There was an open bar and some runny hummus and we each got a drink and sat down to watch the night darken and the fireworks light up the sky.

Around eight o'clock a fleet of seven NYPD helicopters flew low overhead in a classic V. It looked like something out of "Apocalypse Now" and you could hear people humming Wagner from various other tables. The sun was going out and the lights of the city were coming on, most spectacularly the new Freedom Tower, about three miles south of us was illuminated in three tiers of red, white and blue.

Seven miles north or so, the towers of the George Washington Bridge went on. Then the string of pearls, the illumination of its suspension superstructure. Further down the river, about five miles you could see the green of the Statue of Liberty.

At 8:30 it wasn't yet completely dark, but some towns in New Jersey couldn't wait and their fireworks flaccidly lit their small portion of sky. All the while the massive Macy's barges sat stolidly in the river, each with a Macy*s logo burning bright.

The city seemed to quiet as it neared 9:20 and time for the fireworks. A police boat sped by, its emergency lights flashing a bright blue. And then a Coast Guard zodiac boat. The area around the barges was cordoned off. Boats, there were literally thousands of them were kept about 100 yards away.

New York's police, fire and emergency services departments are probably the best in the world outside of Israel or London. They are supremely efficient and frighteningly paramilitary and they had cordoned off a fair portion of the west side, for safety's sake. There were numerous check points, no bags allowed, and radiation detectors to boot.

At 9:20 the explosions began. Boom! Boom! Boom! Loud, palpable percussions that you could feel in your bones. The sky lit up a variety of colors and the pyrotechnics went on and on. It's astonishing, really, when you see something like we saw how your vocabulary and your cameras fail you. Neither words nor pixels can capture the effect of such an event.

Around 10:00, the whole affair was over and everyone in New York streamed away from the river, toward mid-town and in search of a toilet.

Magically, I found, almost immediately, a gypsy cab and we got the hell out of there without getting our hair too mussed.

New York on July 4th.
Posted by george tannenbaum at 8:46 AM

And the Pita Chips?