A cricket in Secaucus. 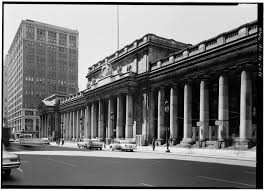 I did, I'm sure, many things wrong in a previous life. Horrible, grievous things, for which I am being roundly punished in this one.

The brunt of that punishment was felt this weekend, when on a sunny Saturday, I had to head out to New Jersey, by train from New York's Penn Station.

New York's Penn Station was once a glorious building. Grand, imposing and of marble and granite. It was designed by Mead, McKim and White, the famed architectural firm. Urban-renewalists in the 1960s tore it down--this was during the brief apotheosis of the American automobile era, and they replaced it with a low ceilinged dump of dull linoleum and flickering fluorescence.

Everything about the place reeks of cheap and urine. I think even the rats stay away, preferring the more fertile stomping grounds (and they do stomp, these rats, like bison on the range) of the IRT and IND subway lines which feed into the station.

So there I was, heading out to New Jersey, a state they should pave over to finish the job they started a century ago. I've been told there are nice parts of New Jersey, and yesterday I saw irenic evidence. As I was switching trains in Secaucus, amid the gales of blowing fast-food wrappers, I heard over the rumble and ringing of the rails and the roar of the not-so-distant turnpike, the sweet chirping of a cricket that made its home alongside the tracks.

The cricket reminded me of Hemingway's snow leopard: "Kilimanjaro is a snow-covered mountain 19,710 feet high, and is said to be the highest mountain in Africa. Its western summit is called the Masai "Ngaje Ngai," the House of God. Close to the western summit there is the dried and frozen carcass of a leopard. No one has explained what the leopard was seeking at that altitude."


Posted by george tannenbaum at 8:25 AM