There are many banalities in modern life, many onslaughts against common sense, many a full-frontal attack on productivity.

The open-plan office sits high on that list. The idea that without a modicum of quiet, without the room to seclude yourself, without the space to concentrate work will somehow, someway be improved.

I am tired, already at 9:35 on a Monday morning, of hearing about: people's weekends, when the 10 o'clock meeting is, how lousy commutes are in the rain and the haplessness of both the New York Giants football tearm and the New York Yankees baseball team.

I like quiet in the morning. Garbo said it best (no surprise there) I vant to be alone.

Just about every morning there is an aggressively gregarious maintenance guy who comes around and makes sure our office space is neat and orderly. Mind you though our space in general looks like an Afghan refugee camp, we are supposed to keep our eight square feet in apple pie order. 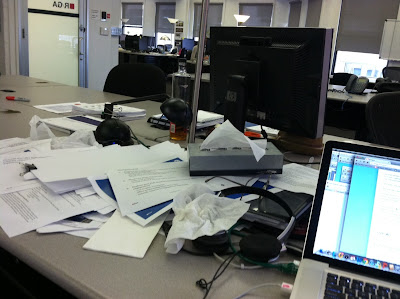 Now it happens, I just read an item in "The New York Times," that compared creativity between people who keep their rooms clean versus those who keep their rooms messy. Here are the neat-messy research findings: "the messy room subjects were more creative, as we expected. Not only were their ideas 28 percent more creative on average, but when we analyzed the ideas that judges scored as “highly creative,” we found a remarkable boost from being in the messy room — these subjects came up with almost five times the number of highly creative responses as did their tidy-room counterparts."

Leave me the fuck alone.
Posted by george tannenbaum at 9:47 AM

Doesn't surprise me at all. Some of the most creative people I met are notoriously messy. As far as keeping the desk neat or their office space well organized. While some of the best accountants seem to enjoy the very act of organizing stuff. Make order out of a mess. Rather than building something new from it.
It might well be that people who are excellent at order are also a little more rigid. Thus less creative. To be creative is to make a lot of connections that initially are seemingly not very logical. It's messy by nature. You have to allow your thoughts to wander in all sorts of directions.
There aren't many, if any, absolutely virgin ideas. Everything builds from something else. Accumulation. Fine-tuning. A new twist on something old. Technology evolves that way. Science is not the art practiced by a genius suddenly coming up with something completely new out of the blue. It's evolution. The finest brains among us keep nagging at problems and sometimes there is a breakthrough. In our profession as writers or art directors most ideas are frankensteins to start with. Assembled from fractions of information we hold in or memory, together with experience, and using our eyes and ears open, until something seems to fit the problem. (Why do we define all we do as a problem?)

David Abbott insisted his department only have on their desks what they were working on, he did the Economist 48 sheet poster campaign that won every poster award: http://soniceditions.com/economist
The only exception to this rule was Tom and Walt who had an office knee deep in paper.
They did they Guinness Surfer campaign that won every TV award: http://www.youtube.com/watch?v=zff9hVH3ptY
Whatever works for the individual I guess.

Just today read a piece in "The Economist", Montessori management. While I'm not sure about the author's grasp of the Montessori method, the following was spot on:

"According to one survey around 70% of all offices in America have gone open-plan. Yet evidence is mounting that this is a bad idea. Over the past five years Gensler, a design firm, has asked more than 90,000 people in 155 companies in ten industries what they think of this way of working. It has found an astonishing amount of antipathy. Workers say that open-plan offices make it more difficult to concentrate, because the hubbub of human and electronic noise is so distracting. What they really value is the ability to focus on their jobs with as few distractions as possible. Ironically, going open-plan defeats another of Montessori management’s main objectives: workers say it prevents them from collaborating, because they cannot talk without disturbing others or inviting an audience. Other studies show that people who work in open-plan offices are more likely to suffer from high blood pressure, stress and airborne infections such as flu."

I agree with you Dave. Whatever works. Actually, my mentor, Lars Ohjne, at my very first job, was both extremely pedantic when it came to keeping his desk neat, and highly creative. However, he was rather tolerant twith the rest of us who simply couldn't keep our desks as neat. He probably figured that if he'd forced us to keep our desks clean we would have rebelled anyway, or we would have had drawers over-filled with unorganized stuff.

@Beth - Not surprising. Wasn't this illustrated beautifully 15 years ago when "Office Space" came out? Or even 20+ years ago with "Generation X" and its "veal-fattening pens"?

Of course the issue is, the open concept layout isn't for (human) productivity or aesthetics. It's to save money on sky-high office rents. Until that problem is solved, veal-fattening pens it is...

Side note -- I went to an open concept school for a couple of years and loved that. Kept my ADHD mind fed and probably helped me focus a lot better in the long run. Not sure the adult me would like it now though...