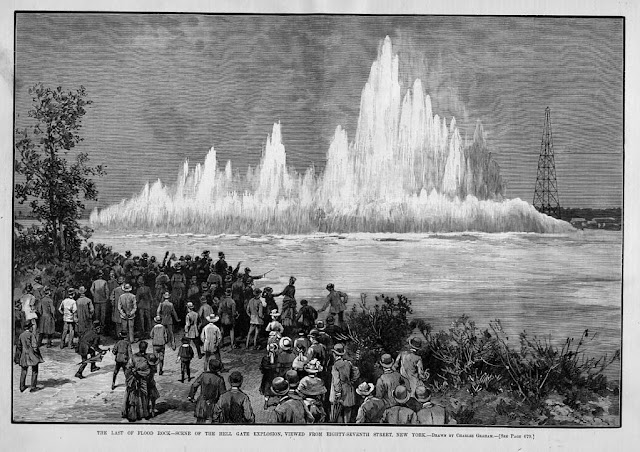 For almost three hundred years, from the time Henry Hudson, an Englishman sailing under the Dutch flag, sailed up the Hudson River in 1609, becoming the first white tourist to visit New York, until October 10, 1885, a nine-acre-sized rock obstructed passage on another of New York's rivers, the East. It was called Flood Rock or Flood Island.

Actually, the East River isn't a river at all, it's a tidal estuary that links New York's magnificent deep water harbor with the Long Island Sound.

In any event, back in 1885 the East looked different than it looks today. (It's probably cleaner today thanks to the sort of government regulations that are being decried by the radical right.) It was strewn with dozens of rock obstructions, making Hells Gate--already treacherous as the tidal confluence of the flow of the Long Island Sound against the tides of the New York Harbor, even more treacherous.

There were large rocky outcroppings everywhere, to wit: Bald-headed Billy, Hens and Chickens, the Pot and the Frying Pan, Bread and Cheese, the Hog's Back, Mill Rock and Rat Island. The last two of these are still there.

New York decided it was time to clear the waters of these rocks and islands. The city gathered together some 300,000 pounds of dynamite and exploded Flood Rock and many of the other aforementioned outcroppings.

The explosion was the largest ever made by man until our 20th Century nuclear escapades. Tremors could be felt almost 50 miles away in Princeton, NJ.

I do a lot of walking along the esplanade that follows the banks of the East. Though it is adjacent to the FDR drive, it is as serene a place as you're likely to find in New York. Most often the only other denizens of the esplanade are be-ear-budded runners and ruddy Puerto Rican fisherman, who are out there more for the malt liquor they drink than the fish they don't catch.

For the most part these compleat anglers bring an over-sized pail to sit on, a large thermos cooler and two or three long surfcasting rods. They attach these rods with bungee cords to the wrought iron fence which girds the esplanade. The more enterprising of these pescatores sometimes attach a small bell to their bungeed contraption. If a fish does visit their bait the bungee keeps their rods from falling into the drink and the bell wakes them from their 24-proof slumber.

These Puerto Ricans are to a man, philosophers. Their pensiveness is induced, I'm sure, by long solitary hours of silent staring into New York's waters. There isn't much to catch down there. Though the East is cleaner than it's been for centuries, the stripers, blues and weakfish have not returned en masse. Perhaps one day they will.

And when they do, perhaps, my Puerto Rican friends will spend less time sleeping and more time catching.

If that happens, I will miss the quiet.


Posted by george tannenbaum at 9:24 AM

Sean, in the States, we used to prefer controlled explosions. That was before the NRA assumed command, of course.

Well there you go again. Snarking on the NRA. If a few nutjobs can be used to taint the reputation of tens of thousands of law-abiding gun owners, then we should take the same view of Muslims by the evidence of their radical, terrorist coreligionists, no?

And remember that the worst schoolyard massacre in history (Bath Township, Michigan, 1918) was caused by bombs, not guns. Even if you could get 100 percent gun control, you can't control crazy.

I wonder what 21st century sophisticates would say about blowing up an innocent estuary.

Here's hoping the tremendous din of fishing activity is squelched by some relevant and timely regulation-making.

It's hard to read things like this and feel that uncontrolled gun ownership is benign, especially ownership of powerful semi-automatic weapons like the AR-15 used in both Newtown and DC.

On one hand, I get your point. Even though the AR-15 thing re: the Navy Yard event has been proven to be a mis-statement. The assailant did not have an AR. Sure it's hard to see those things, especially when you have a tally conveniently stacked up for easy consumption. But I submit to you that such a listing makes it easy to distort the picture. A person could accomplish the same effect using a daily tally of all kinds of deadly events. But hardly anyone in this country, statistically speaking, is affected by gun violence in any given year. This is a big country with a lot of people in it. Criminals can get guns, and criminals and wackos don't seem to be affected by silly things like laws. The real problems are not the guns. Take away the guns and the highly motivated ill-willed among us will find other means.

Sean Peake makes a point that the mainstream media is reluctant to address. The medications are a common theme. Let's look harder at that.