Nobody asked me, but...Spring is Here Edition. 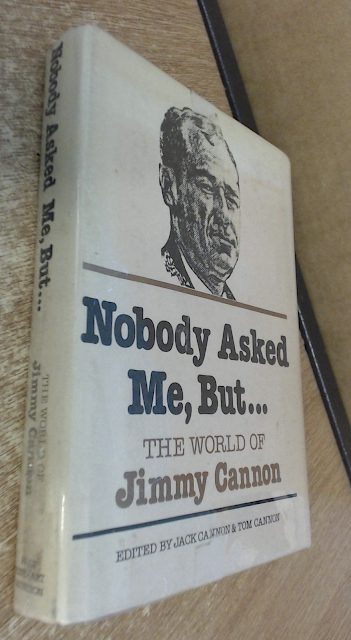 Nobody asked me, but...is my every-so-often tribute to the great New York sportswriter, Jimmy Cannon. When Cannon had no subject to write about, he'd assemble a miscellany like my list below.

I just attended a technology conference. Now I'm thinking of placing an old bathroom scale near my desk. When people ask why, I'll say "I'm copywriting at scale."

90% of the discussion at the conference was about "improved targeting." Which is an anodyne way of saying "increased surveillance."

If you took the cliches and buzzwords away from most people, they'd be unable to speak.

I've been to so many going-away parties lately, maybe we should switch to “who’s staying parties….”

How is it possible I spent 25 years in this business without hearing the words storytelling and insight and now I hear those words 50 times a day?

If I ever had to do a commercial with animated and talking mucous, I think I’d hang up my cleats…

Likewise, if I ever had to use the word sale-a-bration….

But book your time early, the room is filling fast….

It’s 2019 and they’ve yet to invent a dessert that’s better than a creamsicle.

Oh, and I don't mean a fetishized creamsicle made with organic free-range Seville oranges and organic non-pasteurized camel's milk.

Thirty years into the internet era, I think the greatest advance to emerge from this age of technology is the E-Z Pass.

Unlike E-Z Pass, most technology is too hard to understand and I don’t know what it actually does.

Most everything (and everyone) is too hard to understand, and I don’t know what they actually do.

When I’m feeling particularly disconsolate, I watch this scene from George Stevens’ classic movie, “Shane.” Especially the dialogue between 1:00 to 1:40...

I've been watching it a lot lately.