Pushing away in Saltillo.

Back in 1942, there was a song called “Mr. Five by Five” that hit number one on the Billboard R&B charts. Those were the “negro” charts that measured what was then called “race” music, even though the song was first made popular by Ella Mae Morse, a white singer, backed by Freddie Slack, a white orchestra leader, and his white orchestra.

The song was the story of a man who was “five feet tall and five feet wide.” Morse sang,

He’s one of those big fat bouncing boys,
Solid avoirdupois!
Mister Five by Five,
He’s five feet tall and he’s five feet wide.
He don’t measure no more from head to toe,
Than he do from side to side.

When I played ball for the Seraperos de Saltillo so many summers ago in the Mexican Baseball League (AA), our second-best pitcher, after Orestes “Tito” Puente was Federico Norman, a lefthander from down by the Guatemalan border in the state of Chiapas.


Norman, like a lot of Chiapans, was about nine-tenth Indio. And like many Indios, he was uno cinco por cinco—a five by five.

By the time he joined the Seraperos in early April at the start of the 1975 season, Norman had already pitched for 14 seasons in the league. He had over those many long seasons won 196 games against 193 losses. He wanted to play one more season to get to 200 wins, a milestone in any league.

One night while we were playing at home in the el estadio de Francesco I. Maduro, I was sitting in the dugout in my usual spot, to the right of Hector. Though I was just 17 at the time, Hector had anointed me “El Professor,” and believed I had a way of seeing the game more like a 47-year-old would, or a 57 or 67-year old.

Norman was up at the plate and we were losing again, maybe the score was 6 to 4. Losing this time to the Guerreros de Oaxaca, a similarly forlorn team just ahead of us in the standings.

Federico swung badly at a low and outside fastball and he looked bad doing it. He corkscrewed into the ground and fell to all fours. He used his bat as a support and slowly, creakily stood up again.

“He has life in his arm still,” I answered.

“No.” Hector said. “He has memory in his arm. His memory can still throw with a crackle but his muscles can no longer.”

“Alexander had conquered the world by the time he was 33.”

“Not to mention Christ.”

“Let’s leave Christ out of this,” Hector spat. “Federico still have life in his arm as he has always had. He can throw for us this year maybe 200 innings. And he will not hurt the club. He will lose two games more than he wins, or win two more games than he will lose. A team needs a pitcher who can eat up innings while causing no harm.” 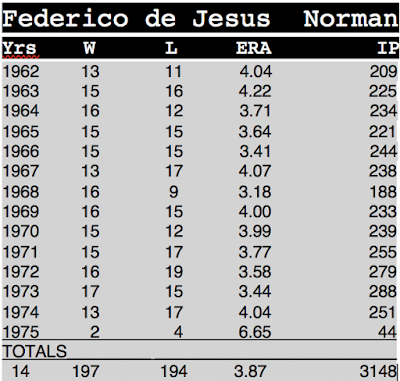 Brutus Cesar, our lead-off popped up behind the Guerreros’ first baseman. The inning was over and I ran out to third to assume my position.

We zipped the pill around the infield, limbering up as Norman warmed up to Issy Buentello behind the plate. His last warm-up tossed, Buentello pegged the ball down to Adame who was straddling second base like a 5’7” Colossus. We tossed the ball around the horn again and over to Norman to start the next inning, the 7th.

Norman, having pitched half-a-thousand games in his professional career, worked fast. He did what a pitcher should do. He worked the Guerreros in and out and up and down. He’d throw heat at a batter’s chin, then a looping curve that would round third and break down and in over the plate. After talking to Hector, I paid attention to Norman that I had never paid before.

He had no stuff to speak of. Teddy Siganos, who played for King and was all-state when I was my senior year and was recruited by the University of Tennessee, had more velocity. He had a decent bender and a ‘fool-me-once’ change, but not much more.

But his control was good and his delivery was measured and steady like a metronome. He was like a diesel engine in an old Mercedes. It seemed like he could keep running forever.

Norman was afraid of no man and over the years had learned a thousand and one tricks to try to keep opposing batters back on their heels.

Still, though, by the second time or third through the line-up, the other guys had a bead on him. Knowing Norman hadn’t the speed to come in on a batter or the strength to stay outside, guys would dig in, wait for their pitch. And by the 5th inning or 6th would begin pasting him around the ballpark.

Norman knew this like he knew telling time. So he kept the ball shoelaces low, or just below the knees. And though he got smacked around, Norman was able to keep the ball in the park and in play. A good grab or two in the field or a nice peg in from the outfield to nail a runner and Norman would escape yet another inning alive on his way to one more 14-14, 200-inning season.

We returned to the bench for our next ups and I sat down again alongside Hector. I was on double-deck and I grabbed my bat and waited.

Garibay got things going with an opposite field single to right. I moved off the bench and into the on-deck circle. Rojas moved Garibay to second on a deep sacrifice to left center.

One down, man on second. The first pitch I saw came right down the pipe, but I let it go for a strike. It was a pitch I wished I had back. But you can’t dwell on things like that too much, or you’ll spend your days and nights dwelling, instead of playing.

I stepped out of the batter’s box and looked down the line at our third-base coach. Was there anything on? A steal, a hit-and-run? No signs from Masa, nothing.

Their guy came inside and again I let it go to even the count 1-1. The next pitch was a sweeping curve that started behind me and broke just outside. Two balls, one strike. The next pitch was high and in but I swung inside out to try to send it down to right-field. Instead, I tipped it nowhere and now the count was 2-2.

I stepped out of the box again and checked again with Masa. Back in the box, their arm chucked one outside, but not outside enough. It was up in my power and I swatted at it like I was chopping down an old tree.

The ball lined just inches over the first-bagger’s outstretched glove and was still rising when it cleared the dark-red wood planking of the right-field fence, 330 feet away, my 5th homer of the still-young season.

Before Ibarra made out number two and Buentello popped up to close our ups, we had tied the score 6-6. Norman came out to the hill to start the 8th and Guerreros' first man got ahold of a fastball up and knocked it over Cesar’s head into center-field deep for a stand-up triple. Their next guy and their next shellacked the ball as well. In less than two ticks, the Guerreros went up 9-6.

Norman did the only thing a pitcher being shelled can do. He rubbed up the ball, prayed silently and plaintively into his glove and tried to find whatever mustard he could to add some zip to his failing pitches.

But his next pitch was maybe the hardest hit that night and right back at Norman, right at his head.

Norman’s memory took over where his reflexes would have failed and his gloved right hand shot up and snagged the bullet. The crack of speeding horsehide into ancient leather resonated through el estadio.

That play settled Norman, and he retired without incident the remaining Guerreros for that inning and the next. We couldn’t scratch at their arms however, and the final tally stood at 9-6, to our bad when the great scorekeeper marked down the game.

It was another loss and another sad night in the concrete locker-room where we stripped from out old flannel uniforms, showered and then left the ballpark. Some boys would try to drink the loss away. Some would whore it away. And some if they had friends they loved, or family, or for me, Hector Quesadilla and his wife, Teresa who had adopted me as their “hijo Americano,” and Karmen Rodriguez, the girl in the white dress, my first love and my summer’s inamorata, would find a way to soothe ourselves away from the pain.

The four of us lumbered down a dirty street to Tino’s, a small restaurant not far from el estadio where my contract accorded me two chicken dinners a month, in addition to the $200 I earned.

We passed the neon and sat at a table near the front. As usual some Flaco Jimenez followed by Freddy Fender was playing on the old Wurlitzer jukebox. We sat down and Tino came over with four cervezas.

We nodded and drank and got refilled and drank some more. In moments Tino was back, balancing four plates heaped with chicken and rice, two per arm. He placed one in front of each of us and brought us each our third cerveza.

Tino’s arroz con pollo is like nothing I’ve ever eaten in my life. I’ve been to what many regard as some of the world’s most-esteemed restaurants, but I’ve yet to find anything that compares to Tino’s. Maybe that’s because I was hungrier then or thinner, or because I was making just $200/month with $10/day meal money, was eating less regularly than I had ever eaten before.

Our meals in front of us, Hector dug in, Gordo dug in, I dug in, while Norman pushed his chair back on the linoleum and away from the table.

“You are not feeling well,” Hector asked him.

“I have had enough,” the old lefthander said. “I am pushing away from the table.”

“You have had enough to eat. You haven’t yet eaten anything.”

“I am pushing away from the table.”

He swung open the flimsy screen door that led into the dusty street. He turned sideways to work his five-by-five frame out. The door slammed shut, rebounded open again, then came to a close, silently.

And none of us ever saw Federico Norman again.