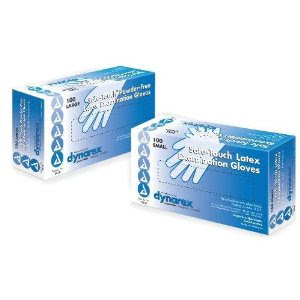 Years ago I worked for a German car company and did some pretty good work and a lot of it. However, every once in a while, the clients would get out of hand and start rampaging and pillaging my work as if they were waging their own advertising version of Barbarossa. After a while, there's not much you can do about that. Clients, ultimately, get the ads they deserve.

In any event when it came time to sign the mechanical of such ads I refused to put down my name. I wrote, instead, FUBAR--fucked up beyond all recognition. It was my last protest against the wrecking of an idea.

Last week I had a thought, perhaps not as subtle as signing FUBAR. For now on when the client is making me write crap, senseless jargon-filled drivel that's more important to them internally than to real live people, I will conduct the following protest.

This morning I brought in a box of 100 Safe-Touch Disposable Latex Exam Gloves, Powder-Free. For now on I wear them when I'm forced to write shit.
Posted by george tannenbaum at 11:33 AM

Good one, though I need to buy them in bigger boxes

George,your point is certainly understood but this isn't art, it's copy writing in the service of commerce. Hence you do what you're told. Seeking integrity? Become an artist.
Otherwise remember it's the career you chose.

Anonymous, I seldom do as I'm told. I like to think clients do as I tell them. That's why I'm valued. And as schmucks like to say, "make the big bucks."