I have just finished Martin Sixsmith's history "Russia: A 1000-Year Chronicle of the Wild East." It is a vast and compendious book and at least one part of it reminded me of advertising. 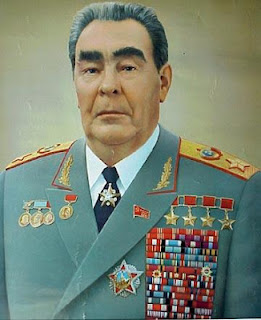 That part involved Leonid Brezhnev, who led the Soviet Union for 18 years, longer than anyone save Josef Stalin, in the 1960s, 70s and 80s.  Brezhnev achieved his position by sticking close to Nikita Krushchev during World War II and afterwards. He was attached to troops but saw little fighting during the Great Patriotic War. Nevertheless as his ego inflated, he rewrote Soviet history to make himself a key player during the key battles of the war. He became a hero of the Soviet Union by being present not during historic moments but instead present when history was being re-written.

Towards the end of his life Brezhnev appeared in public festooned with the medals you see above. He wore more medals than Marshall Zhukov, arguably the greatest general in all of World War II, though Brezhnev saw little if any actual fighting.

He didn't do the job but he was compelled to pretend he did.

There is much wrong with the advertising industry. And, I believe, much of our woes are self-inflicted. Too often we are treated by clients as infants. We don't solve serious problems for them, instead we look to propagate and aggrandize ourselves.

We forget that our job isn't to pin medals on our chests but is, rather, to drive a reaction, a response from viewers. We are here to make a business difference, not a cosmetic one.

On Ogilvy's website for instance, http://www.ogilvy.com/#/The-Work/Galleries/BoO3_scrabble_tag.aspx/ , there is a ten-million-dollar piece of film promoting--you guessed it--Scrabble.

It will be wildly heralded.

It will garner acclaim and awards.

I am 54 years old and a rabid consumer of all types of media. I have yet to see a single Scrabble ad outside of an awards book.

Another fictional medal on an artificially puffed-out chest.