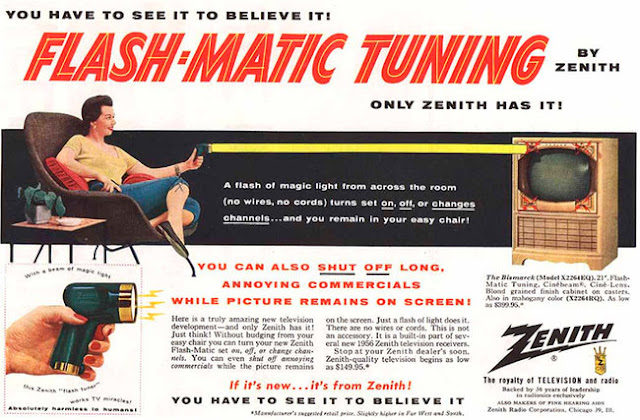 One of the maladies of nearly every age is that humans have a tendency to believe that they invented everything. Just as every teenager believes that he or she invented sex, mankind seems to act as if nothing ever preceded it.

I think about this because Eugene Polley, a Zenith engineer's death notice is in "The New York Times" today. http://www.nytimes.com/2012/05/23/business/eugene-t-polley-inventor-of-the-wireless-tv-remote-dies-at-96.html?_r=1&ref=obituaries Of course you haven't heard of Polley, nor had I. But he invented the wireless remote control for television. Here's what he said about it:  “The flush toilet may have been the most civilized invention ever devised, but the remote control is the next most important. It’s almost as important as sex."

This all happened nearly 60 years ago when Zenith president Eugene McDonald believed viewers would revolt en masse against television because of the "scourge of commercials."

Today, of course, you can't spit in a modern advertising agency without hitting a 24-year-old telling you that TV is dead. That all commercials are zapped.

Maybe it's time for us in advertising to take a different view of commercials.

If they didn't, after all, they could just zap them.

Posted by george tannenbaum at 7:39 AM

Media planning and advertising help your business to create a good brand image among the public.
planning media

Wow, this article really touches me. My father was an engineer at Zenith for most of his career. Many of his patents were in night vision and HDTV (the early CRT versions). My father knew both Mr. Polley and Mr. Adler very well. In fact, they both came to my father's memorial service in 1993 and spoke very kindly of my father. They were both wonderful men and wonderful engineers. Mr. Adler passed away some years ago. Rest in Peace Mr. Polley.

What a great story Liza! How small the world can be...