An evening in the world's second largest Jewish city.

To be a Jew, I think, is to be always on the outside. With the exception of a small strip of desert in the Middle East and a small strip of asphalt in New York City, Jews are a minority wherever they go. Actually, minority is the best of it. In many places and times, Jews were outcasts. They were hated and reviled. Scorned, persecuted, killed.

Outsiderness is our condition. Not always comfortable. But it's served us well. It's made us more aware of our surroundings. More alive to the hope, humor, tragedy and possibilities of the world.

How else can you explain someone like Billy Wilder the great director? Wilder spoke no English when he arrived in America from Nazi-fied Europe in 1933. Yet by the end of his career he had gained 21 Academy Award nominations and seven Oscar wins. 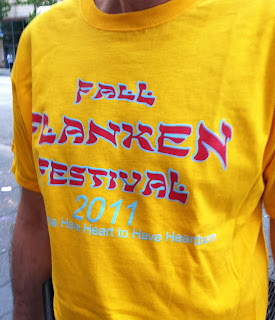 Tonight I had the great good fortune of shopping for books with my younger daughter. She's leaving for the summer to teach scuba diving in the Caribbean and wanted to make sure she had something decent to read. Walking home on 86th Street I saw a man a few years older than me wearing the t-shirt I've pasted above.

It reads "Fall Flanken Festival 2011   You hafta have a heart to have heartburn."

It's nice to feel at home.


Posted by george tannenbaum at 7:52 PM

Being a jew is different in many ways. We're not black.
We're not native americans.
We're often successful.
We look white.
I guess we are white.
But even so we're a minority without being considered one.
When will we have a jew president?
I have a feeling we never will.
No big deal. We're a minority after all. We can live with it.
New York to a degree and parts of LA are partly jewish.
Hollywood is sort of jewish,
America is the only country in the world outside of the U.S A. where being jewish is sort of okay.
That's why I raise my kids here.
Even in Israel we're under threat. Most of my family is there.
I think it's hard for people that are not jewish to think of us as a minority. Or understand the threat.
Many jews are holding powerful positions in business and on wall street.
So we're still secretly hated by many.
In Europe it's not necessarily safe to be a jew.
When I was was last back to my native Sweden, the jewish school in Stockholm was surrounded by armed guards. When we lived in Singapore my kids' kindergarten was protected by armed men.
We'e in a position where we are not seen as inferior. But we're also seen as an enemy of sorts.
This is a very complex thing.What most people don't realize is that most jews are not religious. Not even in Israel. We just are. Normal people.

again, sorry for typos etc. in my precious comment. You get the gist, I hope. Otherwise just shoot me down.

I hope next year's Flanken Festival makes its way to Culver City.