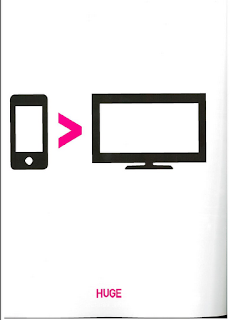 As you may or may not know, last week was something called "Advertising Week" in New York. That means a bunch of swindlers got together and published a thick, glossy program magazine chock-full of terrible ads by advertising agencies.

Such is the state of our business that even the ads we do for ourselves suck. In fact, these particular ones suck even worse (or is it louder) than most of the ads for clients.

In any event, the worst of these ads I pasted above. I'm not protesting against the design or the execution. But I am bellowing about the idea--on at least two levels.

First, does anyone really believe mobile screens are "greater than" TV? Have 70-million people simultaneously watched anything on a phone. Are people tuning in at 8:30 to play with their phone for 22 minutes. If you had a message--if you had to sell a product, would you choose to do it on a phone rather than on TV?

Second, why do we have to take out ads that bombastically assert the supremacy of one media or the obsolescence of another?

Can't we all just agree that they all have a place and leave the mud slinging, name calling and shit shooting to the men who will someday be our president?