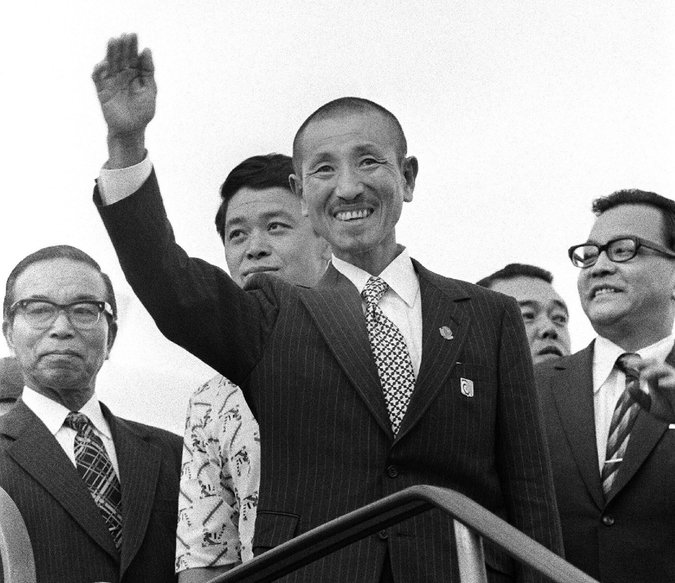 Hiroo Onoda died yesterday at a Tokyo hospital. He was 91 years old. You can read his obituary here.

Onoda had been a second lieutenant in the Imperial Japanese Army during World War II. When the American army was reclaiming the Philippines in bloody fighting, Onoda's superior officer, Major Yoshimi Taniguchi gave Onoda his final orders: to stand and fight.

Onoda followed those orders for 29 years. He did not emerge from the Philippine jungle and surrender his sword until 1974. At that point Onoda was given a hero's welcome in Japan. When he was asked what had sustained him while hiding and surviving in the dank Philippine jungle, he said "I was fortunate that I could devote myself to duty in my young and vigorous years." He had nothing on his mind, he said, "Nothing but accomplishing my duty."

Duty, it seems to me, is an antiquated concept in our modern world. We seem more concerned with fashion or artifice than simple human truths. We seem enraptured and captured by the latest latest and so awed by it and the fool's gold of for-profit awards shows that we forget our duty. Our duty to our clients. Our duty to sell. We are way more concerned with what we say about ourselves than what we actually do. I suppose the advertising metaphor is this: we are all sizzle and no steak.

I've spent parts of the last two weeks "supervising" the creation of a social media strategy and 75 posts that will appear of Facebook and LinkedIn. I've never been involved in creating such things before, and I suppose I could say that I am happy, and better off, for the experience.

This is the world today, and I can't pretend it doesn't exist. And sponsored posts that ask questions like "What's an exercise you could sneak into your day?" are, I'm told valuable to a brand. I suppose at some level they are. To the few people who see such posts and who have donned non-cynical rose-colored lenses, I guess they say the brand is fun and engaging.

A leading Tokyo newspaper, "The Mainichi Shimbun," said this in an editorial after Onoda returned home. "To this soldier, duty took precedence over personal sentiments. Onoda has shown us that there is much more in life than just material affluence and selfish pursuits. There is the spiritual aspect, something we may have forgotten."

I think we have forgotten so much in our business.

I think we have forgotten selling, persuasion and mass.

We use large words and pseudo-science and well-educated illogic to convince ourselves and the clients that pay us that such things no longer matter in the modern world. We have whole companies dedicated to the notion that "new" is the only thing that matters and they have the spurious metrics to prove it.

More and more of us in the business, those who still hold onto some of what were the old verities, I think can relate to Mr. Onoda. To his sense of duty.

But we are left to struggle in a jungle.

And no one wants to repatriate us.


Posted by george tannenbaum at 9:09 AM