A party I went to.

The other night I went to a party.

I know that's the equivalent of Adolph Eichmann going to a B'nai-Brith fundraiser. But I was invited by a lovely friend and we figured we could use the time together to catch up and talk about my career arrears. 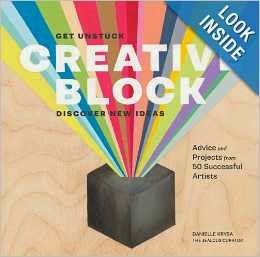 The party itself was organized around the launch of a book titled "Creative Block." You can find the book here. (If you're a creative person, or a human, it may be helpful to you and your loved ones.)
In it, dozens of artists talk about both their art and how they reckon with those periods of time when they feel:

The artists involved at this launch were painters and sculptors and mix-media types. There were no writers present or mentioned in the book.

But the pains they talked about feeling and struggling to overcome are, I think, universal.

Everyone, even the most self-assured, I think, has demons to deal with or sloughs of despond to struggle through.

Overcoming hardship, doubt, adversity is as the core of Western thought. Think of the story of Job. Or the Jews wandering in the desert. Or "Robinson Crusoe." Or "The African Queen."

It's all right there.

Here's the best advice you'll ever get.

When you're up against a wall or a block or even abject stupidity, keep going.

Or as Yogi Berra might have said, "when you can't go any farther, go someplace else."

If you're a writer, just type. Just write what you're feeling and know that by sheer Sisyphusian perseverance, you'll break through.

If you're a painter, paint.

If you're a marine biologist, go to the sea.

If you're a clinical psychologist, see a patient.

The point is simple.

You are harder on yourself than anyone else. Just do what you do and you'll be ok.

Or as I say to my kids, "there are seven-billion people on the planet. Don't be one of those who is anti-you."
Posted by george tannenbaum at 10:31 AM